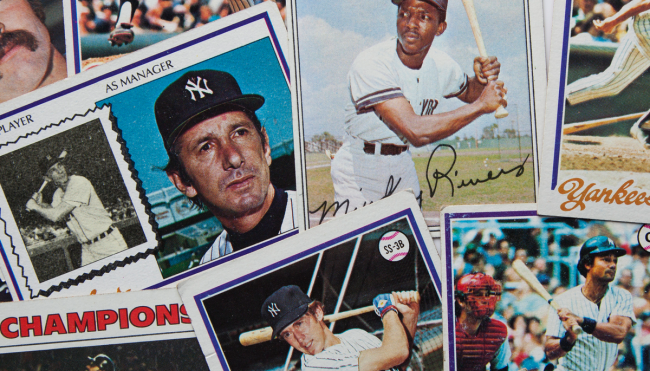 A few weeks ago, I took a trip back to my childhood home. The primary reason for the visit was to see my parents for the second time in the past year, but I’d be lying if I said I didn’t have a little bit of extra motivation in the form of the thousands of baseball cards that had been sitting untouched in a shoebox in their basement for the past 15 years.

I’m far from the only person who’s recently set out on a mission to dig up these relics from my childhood, as baseball cards (and all kinds of different trading cards) have been Having A Moment as story after story has emerged concerning people who unexpectedly struck gold after digging through neglected collections before flipping them for an insane amount of money.

Over the course of the three hours I spend rifling through mine, I repeatedly Googled the value of the cards I stumbled across that seemed like they had the potential to serve as my ticket to early retirement before being greeted with crushing disappointment after discovering there were dozens of them listed on eBay for $1.99.

When everything was said and done, I managed to find a couple that were being sold for a sum that would allow me to buy a bottle of whiskey I usually wouldn’t be able to afford. However, if I wanted to go through the traditional channels to confirm their actual value, I would run into a bit of an issue thanks to the backlog the experts tasked with grading them have encountered because everyone else has had the exact same idea.

JUST IN: Card grader PSA says it is suspending all levels of service in order to catch up with its backlog, which is in the 10 million card range. Will reintroduce services with goal to be fully back by July https://t.co/Mibktk6UuI

As a result, trying to offload trading cards in what is currently the ultimate seller’s market is like trying to flip your house in 2007 without being able to find an inspector who could tell you what it’s worth—and like so many similar booms in the past, it seems like there’s a very good chance it could only be a matter of time until the good times come to a very sudden end.

Prior to the start of the most recent craze, the vast majority of trading cards that sold at a price significant enough to garner headlines were valued as high as they were thanks to a combination of scarcity stemming from collectibles that were initially produced in fairly limited quantities and the scarcity caused by kids who threw them in their bicycle spokes, parents who chucked them into the trash, and people who tucked them away in a place where they’ll likely never be discovered.

As a result, there’s a difference between a T206 Honus Wagner you’re not going to randomly unearth while scrounging through your old stash and the pieces of cardboard that have allowed the people who are essentially the trading card equivalent of early Bitcoin adopters to make some serious bank. There’s obviously a difference between cryptocurrency mania and the trend currently taking the world by storm—you can’t just hit a button and add a Michael Jordan rookie card or a first-edition holographic Charizard to your portfolio—but this is a classic case of supply and demand.

It should go without saying that the trading cards that have recently sold for a hefty sum have garnered as much as they have thanks to their perceived rarity, but it seems like the people who’ve purchased them are setting themselves up to fall victim to their short-sightedness. I’d argue there’s a pretty clear correlation between the increase in the number of sales that pop up in the news and the number of people who are motivated to revisit the trading cards they amassed as a kid—just like there’s an inverse correlation between the number of them on the market and the amount people are willing to shell out.

When the man known as “Vegas Dave” unloaded a Mike Trout card he’d previously purchased for $3.9 million last year, he predicted “the sports card market will collapse in 24-36 months.” There’s no telling if that prophecy will be fulfilled (or if he and I will turn out to be absolute morons who end up being forced to eat our words,) but if the bubble does indeed burst, you can’t say I didn’t warn you.