The Post-Credit Podcast Ep. 2: What Went Right And What Went Wrong In ‘Batman v. Superman’ 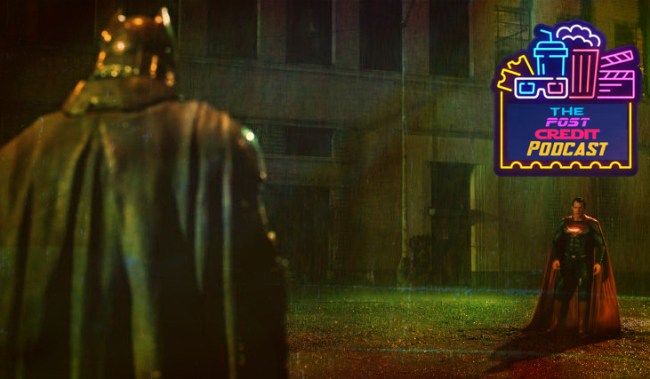 After 2013’s Man of Steel, Warner Bros. and DC Comics decided to fully lean into the shared-cinematic-universe style of filmmaking popularized by their rivals over at Marvel by making Batman v. Superman: Dawn of Justice, a “sequel” to Man of Steel that puts its own title character second after the *true* headliner, Batman.

Given the record-shattering and precedent-setting success of The Avengers, it’s — at the very least — understandable that the cinematic home of the two most popular superheroes of all-time would rush into having the pair cross paths on the big screen for the first time. Ultimately, as the general reception to both BvS and Justice League would certainly prove, that hastily-made decision wound up undermining what should have been an epic cinematic event, as neither film would gross over a billion dollars at the global box office.

While Justice League is an out-and-out disaster, there are plenty of people out there, myself included, that argue — despite all of its admitted flaws — there’s still tons to love when it comes to Batman v. Superman.  Still, as much as I may try to view BvS with rose-tinted glasses, there are undeniable lows that drag down what I believe are genuinely underrated highs (that Batman warehouse scene, for example, is comic book filmmaking of the highest order).

So, with less than two weeks until DC FanDome on August 22, Brandon and I continue our look back at the DCEU thus far, arriving at perhaps the most divisive superhero film in a decade full of them: Batman v. Superman: Dawn of Justice. From the film’s best moment to its (obvious) worst performance, it’s time to find out once and for all whether or not Superman bleeds.

Is Jesse Eisenberg's #DCEU version of Lex Luthor the worst portrayal of any character in the entire history of American pop culture?