The Future Of Arcades Is Here: Main Event Now Features ‘Beat Saber’ In Its VR Arcade 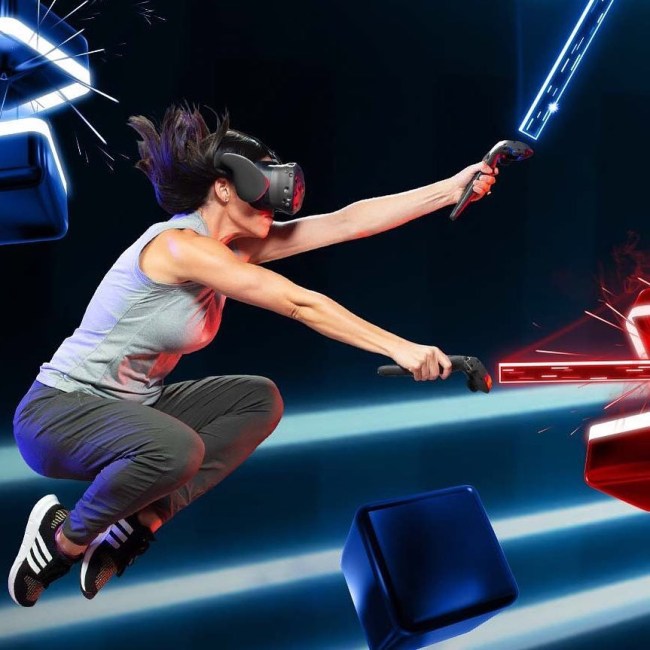 I’ve long assumed virtual reality (VR) was very much like the inside of Kanye West’s head: A magical, bizarro-world land of fiction that can somewhat parallel reality but is heavily doused with delusions of grandeur and Kardashian puppets.

“VR is a technology that’s still in its infancy,” said Adam Blumenthal, professor of The Practice at Brown University and vice president at Nucco Brain Studio at Unit 9

“But even in these early days there are many use-cases where we’re going way beyond the novelty of a shiny object, and actually achieving real outcomes. The current state is exciting, and the promise is transformative.”

Of course, the most common use for VR – at least for now – is gaming. And Beat Saber, where players slash beats of adrenaline-pumping music as they fly toward the player, is currently the top single-player VR game I the world. The game includes several songs and five levels of difficulty as players use VR motion controllers to wield lightsabers which are used to slash corresponding blocks. The game was initially played through HTC Vive, Oculus Rift, Windows Mixed Reality and then was fully released in May 2019. PlayStation VR released a version in late 2018 and Oculus Quest released it in May 2019.

“We are constantly pushing innovative ways to treat our guests to experiences they can’t get anywhere else,” said Sarah Beddoe, chief brand officer, Main Event. “By being the first family entertainment center in the country to introduce Beat Saber, we think we’ve done just that.”

In celebrating the debut, guests who signed up to become Main Event members during what they are trying to rebrand (Labor Day) into “Saber Day Weekend” received a free Beat Saber game. This follows a pattern for Main Event, as it also features popular games like HOLOGATE and Virtual Rabbids: The Big Ride at select centers.

“Beat Saber is a great game for Main Event to feature,” added Blumenthal. “It’s simple to learn and really fun, and it’s also a great social game, ideal for competition and awesome to watch people playing.”