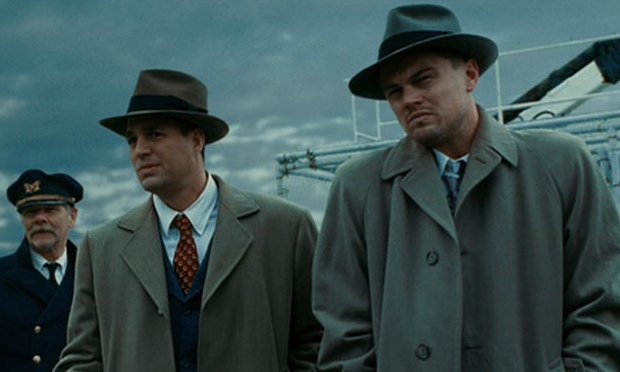 With John Krasinski’s Jack Ryan series due out at the end of the month and Julia Roberts’ Homecoming set to debut on Amazon Prime in early November, there’s no better time to look through what political and psychological thrillers the streaming service has to offer for its users.

Amazon has produced several suspenseful crime dramas in the past (see: Bosch, Sneaky Pete, and Goliath), but the company has never delved fully into providing us with a twisted, whodunit puzzle that the audience must try to solve every episode (think: HBO’s True Detective or Sharp Objects).

The good news is that, in preparation for the two big TV premieres, the site has plenty of films to satisfy that craving for mystery lovers everywhere.

Related: The 21 Best Stoner Movies To Watch On Netflix

Here are the 20 Best Thrillers t to stream on Amazon Prime right now:

Arguably the most re-watchable movie ever made. Inarguably the aboriginal blockbuster. In between those two distinctions is a story about three men — a local police chief, a marine biologist, and a professional shark hunter — who endure the anxieties of the open sea in pursuit of a great white shark. One part action, one part horror, one part mythic monster adventure — Jaws is a film that stitches together threads from various genres, one of which is psychological thrillers.

The fifth of November,

The Gunpowder treason and plot;

I know of no reason

Why the Gunpowder treason

Should ever be forgot!

It’s hard for November 5th to pass without hearing someone uttering this verse, and that’s because the Wachowski’s classic dystopian political thriller left an imprint on many when it debuted in 2005. Thirteen years later, and this movie’s plot of a neo-fascist regime overtaking England continues to resonate. And it’s not because of the horrendous miniseries HBO produced last year. (Yes, that one where Kit Harrington plays an associate of Guy Fawkes during the failed Gunpowder Plot of 1605).

Primal Fear is the best Edward Norton movie you’ve never seen. Therefore, you need to watch Primal Fear as soon as possible. If Norton’s baby-faced altar boy (who’s accused of murdering a priest) doesn’t sell you, then stay for Richard Gere’s attempt to crack the case. This one has more twists than a pretzel.

Frequency‘s 7.4 rating on IMDb is confirmation that my childhood nostalgia for this movie isn’t solitary. To put it bluntly: When I was a kid Dennis Quaid and Jim Caviezel actually convinced me that one day time travel would exist.

When you play the word association game with “Martin Scorsese” and “thriller” one generation of moviegoers would scream Taxi Driver! Another would go with Cape Fear. And then there’s the recency bias from this generation — guys born who were born in the last 35 years, who would undoubtedly pick Shutter Island as their favorite Scorsese mind-bender. The acclaimed director puts Leonardo DiCaprio’s Teddy Daniels — or is it Andrew Laeddis? —   on an inescapable carousel of psychological island torture. It’s a ride that you’ll be discussing for hours after the final credits roll.

The greatest trick the devil ever pulled was convincing the world he didn’t exist.

Verbal Kint is one of the ingenious characters ever to grace the big screen. The man who played him won an Oscar for the part. He got into trouble last year, and has been deservingly exiled from Hollywood for the foreseeable future. It’s hard to discuss this movie without talking this main performance. But, suffice it to say: The Usual Suspects is my favorite film on this list. I watch it once every year. I still get goosebumps during the final reveal. I could go on but it might be better to just move on.

You won’t know what the hell happened after it ends the first time but there’s no way it won’t leave you thinking — desperate to piece together this disturbing puzzle. Newsflash: There’s no solving this mystery. David Lynch takes you for the ride of a life time. Enjoy it. Few films have the raw power of seizing you like Mulholland Drive, despite the fact its plot is indecipherable.

Claire Foy gives one of the best performances of 2018 in this Steven Soderbergh-directed thrill ride. The movie makes you re-think if you ever want to step within 100 yards of a mental institution, and makes DiCaprio’s journey in Shutter Island seem almost pleasant.

Francis Ford Coppola has made some incredible films over the years about paranoia. The Conversation, in particular, stands out as one that any film lover should put aside two hours for on their next rainy Saturday afternoon. Of course, he’s not a lightweight when it comes to psychological dramas, either. Heard of Apocalypse Now? He brings the best of both of those films to this 1997 adaptation of John Grisham’s novel about idealistic young attorney played by Matt Damon. It’s one to be devoured.

Grisham wasn’t the only international, best-selling author to have his books turned into movies at an accelerated rate in the 1990s. Tom Clancy got his turn with this Harrison Ford action thriller. For anyone who’s getting ready to start streaming Jack Ryan, this is a must watch. Ford reinvented the character that Alec Baldwin launched in the Hunt for Red October — the same one that Krasinski’s stepping into at the end of August.

One of the best movies of 2017, and a total surprise breakout turn from Robert Pattinson. Seriously. The dude has some serious acting chops. While I would classify this as a purely action movie, Amazon has it under mystery’s. Go figure.

There are dozens of movies that depict the psychological purgatory the Vietnam War imposed on a generation of American men. Few do it better than this 1990 thriller starring Tim Robbins, who plays a veteran named Jacob who can’t seem to figure out what is true and what is a delusion — did he serve in the war or are his memories all part of a military experiment done on “soldiers?” Jacob climbs the ladder all the way down. It leads to one of the most disturbing conclusions ever. The original The Sixth Sense.

It Comes At Night

If we’re going to dip our toes in the horror pool for a second, then we should visit this one from last year. While some said it didn’t live up to the hype when it premiered last year, I think this Joel Edgerton-led mystery is the type of apocalyptic slow burn Hollywood could use some more of in the years to come.

Ask and you shall receive: A Quiet Place (available to rent on Prime) was released less than 10 months after It Comes At Night.

Jake Gyllenhaal stars as freelance cameraman Louis Bloom, a con artist who stalks the late night crime scene in Los Angeles with a disturbing fetish. Gyllenhaal gives a dynamite performance — one of the best of his career. Nightcrawler is a must watch for anyone who’s ever wondered while staring at the evening news, “how did they get that footage?”

It’s extremely tough to select just one Nicholas Cage movie to watch on this list but then again not every Nic Cage tentpole has him playing a drug-and-gambling addled detective in a post-Hurricane Katrina New Orleans trying to solve the murders of five Senegalese immigrants. I had the pleasure of discovering this gem on Amazon recently. If you like suspenseful crime stories, then look no further than director Warner Herzog’s best feature film.

Richard Gere, making the first repeat appearance on this list, stars in this crime story alongside Don Cheadle, Ethan Hawke, and Wesley Snipes. Need I say more? No, no I do not. I’ll let the film’s tagline do the talking for me: Three unconnected Brooklyn cops wind up at the same deadly location after enduring vastly different career paths.

If we’re going to go full crime thriller tangent here, we might as well include Boondock Saints, which was an iconic movie for a specific generation of theatergoers. Or, in this movie’s case, DVD watchers. Without this movie, who knows how long it would have taken for the streaming boom to come along. Fact: It made $30,471 in five theaters in its original run. It has since grossed $50 million. Never doubt the power of a cult following.

Jack Nicholson in front of the camera? Three-time Oscar winner. Jack behind the camera? Three movies made, all forgetful. This sequel to the 1974 classic Chinatown (note: not available on Prime but definitely worth checking out) was the last of Jack’s trio of efforts to become the next Clint Eastwood. The dream ended with detective JJ “Jake” Gittes investigating adultery and murder, all stemming from the hands of a mysterious oil monopoly. All of it leaves me wishing that Jake would have just forgotten about Chinatown.

Jaime Lannister (actor name: Nikolaj Coster-Waldau) is barely recognizable as a recently-released prisoner who is forced by gang leader to organize a hit on a rival street group in Southern California. It holds your attention for the first hour before dying off.

A little mystery, a little horror, a little crime — Green Room borrows elements from all three genres to concoct a recipe that goes down like a shot of fireball, and one that leaves your head spinning for days. The late Anton Yelchin stars as a young rock musician who must escape the clutches of a villainous Patrick Stewart after witnessing a murder at a neo Nazi skinhead bar. Yes, you read that read correct: Patrick Stewart is the villain. He plays the ruthless owner of said bar. If that doesn’t get you excited, then I don’t know what does.