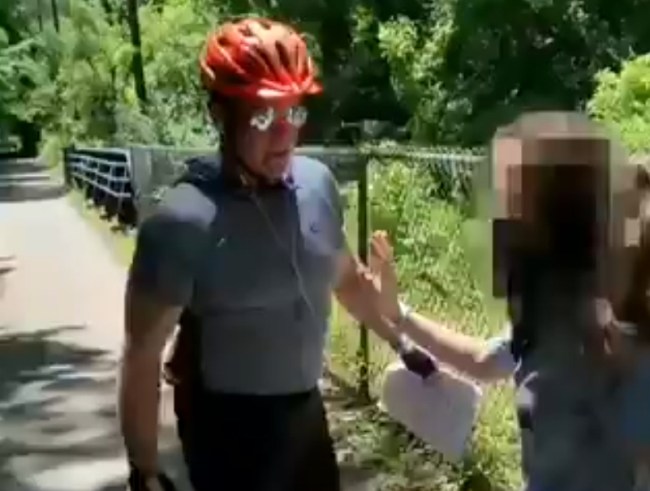 With so many videos of protests, police attacks, and citizens going crazy making the rounds on the web, it’s impossible to keep track of everything going on, but one of the bigger viral videos of the week involved a “male Karen” on a bike assaulting college kids.

Around 12:45 p.m. this past Monday, a bicyclist on the Capital Crescent Trail in Maryland assaulted several college students posting pro-George Floyd signs.

One of the victims caught the entire exchange on video and posted the clip online.

In the video, the biker is seen trying to pull a roll of tape off a woman’s arm then using his bicycle to charge at the man filming the entire exchange.

The victim recording the incident said the man tried pinning him to the ground with his bike, which is evident in the clip.

They were putting up signs to commemorate the death of George Floyd. He wasn't having it. pic.twitter.com/eukrXrxoLN

“He was just cycling down the trail,” one of the victims told the Patch. “He videoed us on his first pass by, then stopped about 50 feet passed us and asked to see my signs, in a friendly tone. When I went to show him the signs, he ripped them out of my hands and then started to go after my friends. That’s when I started recording.”

After a few days of searching for the biker, TMZ is reporting that police have arrested the assailant in the case.

The Maryland-National Capital Park Police say detectives have arrested and charged the cyclist, Anthony Brennan III, with three counts of second-degree assault. Cops say an arrest warrant was issued and he turned himself in to detectives.

Police say Brennan forcibly grabbed the flyers from one of two female victims, then pushed his bicycle towards the male victim and caused him to fall to the ground before leaving the scene.

The police thanked the community for bringing the man to justice and allegedly received hundreds of tips on his identity.