People Shared Their Biggest Screw Ups They Fixed Before Anyone Noticed 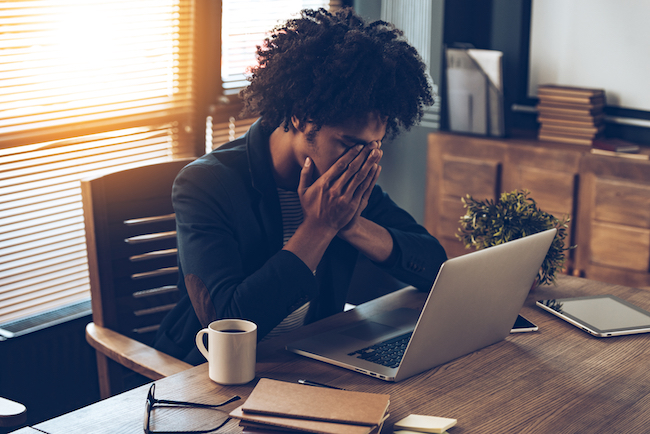 Last year, I took an art class. The instructor said something profound on the first day that I’ll never forget because it not only applies to painting but basically everything in life. “A great painter is the artist who learns to fix their fuck-ups.”

People make mistakes and life is full of screw-ups. A thread on /AskReddit polled readers looking for their biggest mistakes that were fixed before anyone noticed. From burned carpets to almost starting a war, every one of these near-catastrophic blunders will make your entire body cringe.

“I made a cake for work, and accidentally swapped sugar for salt. As I was prepping it in the staff lounge, I cut myself a small bite, and tasted it, it was horrible! People were already arriving for lunch, and being known as someone who bake amazing cakes, people were excited to have a slice. Not knowing what to do, I picked up the cake, and using all of my acting abilities, ‘stumbled’ and dropped it on the floor. I left a huge cake mess, but saved my reputation!

The best part was that the boss felt so bad for me (and perhaps disappointed at not getting any cake) that he told me to head down to the local bakery and pick up a cake, and he’d wire me the money, to cover the expense!” – Nikmi

But Why Were You Sending Her…?

I woke up to a message from Facebook telling me they’d auto-removed my post because it appeared to be spam (the message contained a link and my heart almost jumped out of my chest and ran away). I don’t think anybody saw it thank god. I’ve never been so grateful to a robot in my entire life.” – Backwater_Lunatic

“I was writing a religion paper for high school, and my mom really wanted to proofread it. I turned her down time and time again, but eventually, let her take a crack at it.

Thanks to her, I didn’t submit a paper on ‘The Lion, the Bitch, and the Wardrobe’.” – bipass

Pulled The Rug Out From Under Them

“Parents went out for the weekend, I wasn’t a bad kid so there was only one rule: No hookah in the living room. Easy enough, smile and wave, promise not to burn the house down, yada yada yada, I end up smoking hookah in my living room, which had been recently recarpeted. One of my friends goes to flip the coal, and I gave him a warning of how this was the ONLY rule I had, and if he dropped the coal, my parents would never let me live it down, plus I didn’t have enough money to get my entire living room recarpeted before they got back. He nods and goes for the coal.

Next thing I know, the red-hot coal falls onto the carpet and starts sizzling a nice burn hole directly into the center of the rug. I jump for it, attempting to pick up the hot coal with my hands. I succeed in getting the coal back onto the hookah, but not before shooting a bunch of embers onto a floormat by the door. (The floormat was a surplus section left over from the new rug, and luckily had the same wear and weave pattern as the area I had burned.) Luckily, one of the friends I was with had a father who installed rugs professionally.

On Sunday, George, who we now call the ‘Carpet Whisperer’, worked overtime on his hands and knees to patch the spot I had burned. A half hour before my parents got home, George finished up, and left me the burnt cutout piece, promising not to tell my parents. He did leave me with the burnt section he cut out, which I still have tucked away for a special day.” – ryankennethhull

“This is less a fuck up and more a near miss.

One time, before I knew shit about cars, my ’87 truck overheated on the way to work. I pulled over, walked into a gas station and grabbed a gallon of water because I knew that when a car overheats you’re supposed to pour room temp water into the radiator.

What I didn’t know was that it needs to not have been running for a few before you attempt to unscrew the top. The superheated geyser that resulted missed melting my face off by a cool 6 inches or so.

Never did that again.” – Aaaaaaaandimdone

“At work (on my personal email) I was emailing my best friend who was Polish, we often used “Polak” as a joke. Me being part Italian I also referred to “greasy Italians”. Sent the email to my friend, looked again and realize I had typed it up in the wrong email window and sent it to a client.

I instantly recalled the email and sent an email apologizing to the client saying it was intended for them.

Thank god for old Microsoft outlooks recall feature. It saved my ass that day in 2008. The client never got the original email. – Xcopa

“Late one morning I was going 68mph in a 35mph zone. Saw the cop on the side of the road and pulled over before he could even start his car or get his lights on. Came up to the window, said he’s never seen someone pull themselves over and that he wished I ran because that would be more fun. Thirty seconds later he gave me a verbal warning and sent me on my way… lucky shit!” – DrClo

“My sophomore year of college I was failing 3 of my 4 classes near the end of the semester due to too much partying and not enough working. I was able to drop two, fail one, and pick up a ‘flexible learning’ course that counted for that semester but I had 16 weeks to complete.

Had that not all worked out I would have lost my full ride and probably would have had to move back home to the community college. I still had to appeal my scholarship and was on academic probation for a year, but I got back on track and just completed my masters.” – watergator

I was serving in the Navy during the War on Terror, on my second deployment, and was in Navigation. Our Captain was a little… eccentric? And he liked fucking with people. So one night he came on the bridge in his robe and fuzzy slippers and asked me to plot out 12 nautical miles from Iran. Which marks the shift from territorial to international waters.

My “mission” for the rest of the night was to ride that line. Either to let them see us on radar just outside of their waters or just to give me something to do for shits and giggles. So for the next few hours I was advising course corrections and doing everything I could to keep us close to but not inside that line.

Except for the little slip up of forgetting to account for drift once. Whoops. So for about… 10 minutes or so the US Navy had technically invaded Iran’s territorial waters. They apparently didn’t notice, and I corrected it quickly.

In truth, it’s probably not nearly as big of a deal as it sounds, but at the time 21 year old me was fucking sweating bullets, thinking I’d just declared war on a foreign country or something.” – ClearingFlags

One Flew Around The Cuckoo’s Nest

“I am a Vet, the office I work at it open 24/7 but there aren’t many workers around from about 2:00 to 4:30 am. One night it was Christmas Eve and I offered to stay. I was there with two other people and it was about 4:00 am, the two others went out to get some coffee, I stayed back and watched the animals while they were out.

There weren’t many animals but there was a parrot. A few minutes after the other workers left th parrot started screaming, it started making these hideous wailing sounds so I went to see it and it had gotten its toe stuck in the latch to open the cage, I opened the door to free it and it flew out, I chased after it but then I LOST it, it was being quiet so I couldn’t hear I think and it refused to come out, then the other workers came back and I went into full panic mode because I had just lost a very ill bird that was supposed to go home at 7:00 am.

Just as they walked in I made up some bullshit excuse as to why I couldn’t chat with them and I went looking for the bird, luckily it screeched again and I found it and put it back, nobody ever found out but I panicked a little when someone came in to do XRays a little later and yelled out “why is there bird shit on the computer?” – Grandma_Is_Satan

“One day after a night of heavy drinking, I woke up to find I had shat myself while I was asleep. I was absolutely horrified as you can imagine. I quickly showered and stripped the bed, taking extreme care to remove any trace. I was just finished when my boyfriend came home. He didn’t suspect a thing.”  – GreenGoddess33

“I once drove 10 hours to see a girl I barely knew in Washington, DC (we ended up dating). We went out on the town and got pretty drunk and had a great time. We went home and things started heating up in the bedroom. I figured we were gonna do it. You know, it. I had to pee, so I went to the bathroom.

I hung dong on her, it was great, and we went to sleep. But then I woke up about 3 hours later having peed the bed. NOOOOOO!

I panicked. I rolled her to one side, tucked the sheet under her, and rolled her over it and slipped it out from under her. Luckily she was in a dorm, so it had those plastic mattresses that are in every dorm, so it was easily wiped. I took the sheets and wet stuff and stumbled around, quite literally, the whole dormitory looking for the washer and dryer. I managed to wash and dry the sheets, and make the bed under her without her ever knowing.

It was a great trip.” – masonroese

It’s Not The First They’ve Seen

“I accidentally sent a dick pic meant for my girlfriend to a group chat I have with my three sisters.

Luckily my service went down right before the picture was sent. Was so relieved to see a message saying my message was not sent would you like to retry, no, no I would not.” – RebelLion_HalfBrain