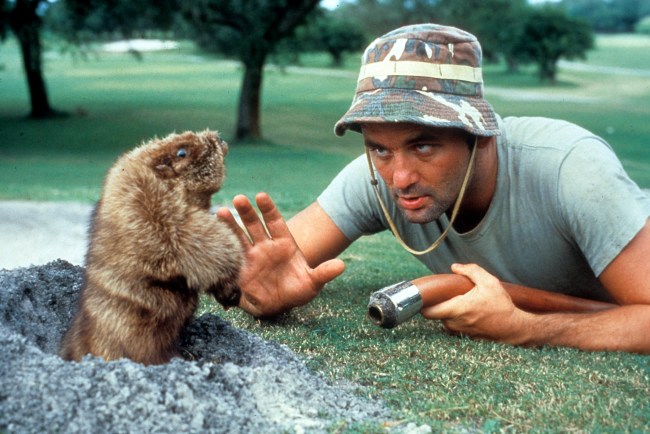 Bill Murray is one of the greatest entertainers of our time— a comedy icon who is as entertaining onscreen as he is off of it.

In recent years, a number of stories have surfaced concerning the actor’s real-life exploits, which largely involve him violating social norms and doing whatever the hell he wants in the most affable way possible.

Some of Murray’s shenanigans have been documented by his “victims,” like the time he crashed a bachelor party (which is far superior to more traditional forms of entertainment you typically find at such gatherings).

He also once walked up to a table and stole french fries from a total stranger.

He even managed to sneak into a White House press briefing just so he could remind everyone the Cubs won the World Series. 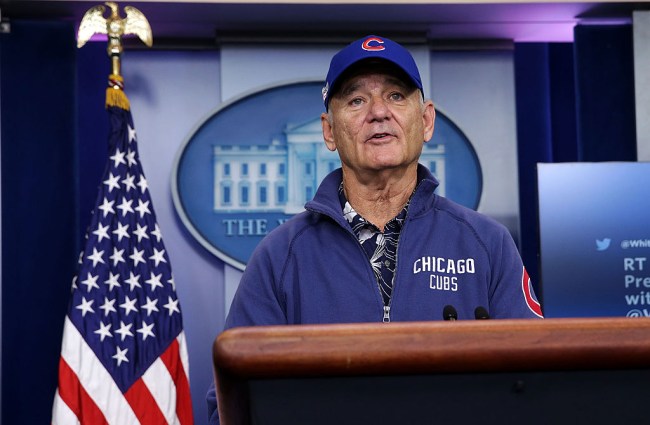 However, there are plenty of undocumented anecdotes about people’s encounters with Murray that almost always end the same way: with the actor telling the person he messed with that no one will ever believe their story about their run-in.

Yesterday, we highlighted Murray’s latest brush with a fan and promptly received an email from a reader containing a never-before-told story that only adds to his legend.

~12 years ago 05/06 winter break, My buddy got on a plane to go back to school after the holidays.

When he boarded and got to his seat in coach, he sat down and the arm rest/seat belt broke. The stewardess came over and tried to fix, they couldn’t and moved him into first class.

Plane was completely full since it was holidays.

Gets to first class, row 1, the entire plane is watching as he is frantically shoving his stuff into already full overhead bins.

At this point he thought he saw someone in the corner of his eye, but the guy had bucket hat, sunglasses, and was reading a magazine.

He thought it could be Bill Murray but he can’t look to confirm cause he’s got the stewardess in his grill blocking his view and helping get his stuff in the overhead bins.

I know exactly how this guy felt. One time I thought I saw Ryan from The O.C. on a flight.

It wasn’t him. That’s about the closest I’ve ever come to seeing a celebrity on a plane.

Every time he tried to sneak a peak the guy was looking the other way or had something covering his face. (Think Wilson from Home Improvement)

My buddy finally passes out, the stewardess wakes him up after the plane landed and passengers are disembarking. He frantically looks but the guy was gone.

He grabs his stuff and heads to baggage claim.

After 20 minutes of waiting, his bag comes out and he grabs it and starts heading for cab line or friend who is coming to pick him up.

Remember this is ~12 years ago, this is PRE-IPHONE, PRE-UBER, pre-everything. Facebook was a private company and Snapchat and Instagram didn’t even exist yet. The BlackBerry CURVE was the #1 cell phone.  “Apps” didn’t exist yet.

I vaguely remember those days. It was a truly dark time for the world.

What does this mean?

Airports were basically the Hunger Games. People were everywhere trying to figure out where to go and it was borderline a lawless human zoo.

Anyway, as he’s making his way to figure out how to get to school carrying all of his bags heading to the door when he gets jumped from behind and put in a headlock.

He falls to the floor and is given what he said was the hardest noogie of his life, his bags and stuff go flying everywhere (he said nobody flinched, nobody helped or did anything.

He’s not sure anyone even noticed)

After 5-10 seconds, the person let go of him, he starts to get up from the ground, sees his bags are still there and looks up…

Bill Murray is standing in front of him, staring, deadpan as can be. He utters…

Turns around, one hand in the air waving, walks straight into a black town car and was gone.

Call me Special Agent Fox Mulder because I want to believe.

Thanks to Gregory for sending this our way.