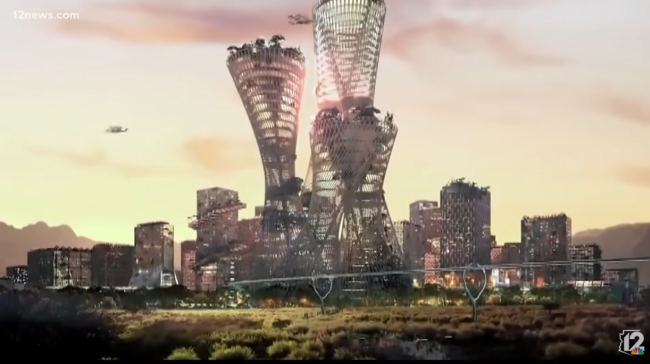 Lore, who served as Walmart’s head of U.S. e-commerce after selling his website Jet.com to the company for $3.3 billion, wants to take the best parts of several of the world’s best cities and create a modern utopia in the desert.

He just needs $400 billion in funding. And a very large plot of land.

Until then, Lore has gone ahead and hired the world-renowned architectural firm Bjarke Ingels Group (BIG) to design the city.

According to CTV News, “The ambitious 150,000-acre proposal promises eco-friendly architecture, sustainable energy production and a purportedly drought-resistant water system. A so-called “15-minute city design” will allow residents to access their workplaces, schools and amenities within a quarter-hour commute of their homes.”

The website for the city of Telosa states, “Over 80 percent of people in the United States live in metropolitan areas — which are also the source of over 90 percent of the economic activity of the U.S. and have become important hubs for higher education, research, science, and technology. A new city built from scratch avoids the legacy issues of infrastructure and policies that constrain and restrict what can be developed. The clean slate allows the opportunity to redesign a city with the needs of people at the center. We benefit from the knowledge, innovation and expertise that has been learned since other cities were built in the US. We can build the most sustainable and resilient city that will serve as a model helping residents in existing cities along the way.”

Residents will take part in something called Equitism – an economic system in which citizens have a stake in the land; as the city does better, the residents do better.

So who will be living in this utopian town?

“This city is being built for everyone. This is not a private city,” the website claims. “We want Telosa to be representative of our society. We want to create an environment in the city where everyone can reach their full potential. We want to attract those that want to be a part of building something better. Just like many of our predecessors, the initial residents will be pioneers such as entrepreneurs in all industries, educators, manufacturers, artists, students, builders, telecommuters, mentors and corporations. In some cases, we will invest capital in new businesses coming to Telosa. As we grow organically, we will continue to attract diverse businesses while expanding to a wider audience of residents looking for a higher quality of life.”

Oh, wait… it’s not going to be a utopia?

“No, we are absolutely not attempting to create a utopia. Utopian projects are focused on creating a perfect, idealistic state — we are not. We are firmly grounded in reality and what is possible,” the website states. “We are focused on the best, most sustainable solutions for infrastructure, urban design, economic vibrancy and city services, but we fully recognize that no solution is perfect and all human systems have flaws. Therefore, we are committed to new ideas, finding the best way to solve difficult problems and constant improvement.”

Sounds great. When can we move in this woke city?

“Our first residents will start moving in by 2030.”

So… which one gets built first? Telsoa, Elon Musk colonizing Mars, the moon city for astronauts, or the mile long city on a ship?