BroBible may earn a commission if you buy a product or service via links in this article.
by Brandon WenerdMay 9, 2022 4:22 pm 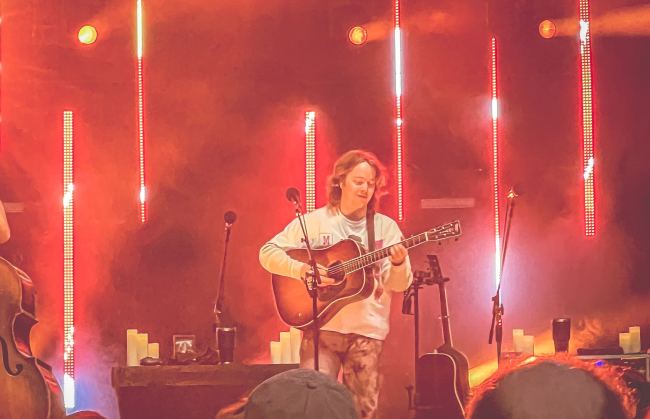 The mythos of Billy Strings is a runaway train that just won’t stop.

As live music fans, how did we get so lucky?

Almost every week, Strings seems to one-up himself on doing something that makes music fans go “wow, did that just happen?!” He’s one of the most exciting performers of a generation, rising to prominence in the last five years with a lot of hard work and gumption. He has the talent. He put in the time. He’s honed his skills and expanded his network, calling household-name musicians like Post Malone a buddy.

Billy Strings is blowing up in the best possible way

He honors bluegrass traditions while not being afraid to slay a couple of sacred cows – a worthy sacrificial offering in the name of pushing musical boundaries. He put himself out there in a way that takes big cajones.

Strings hasn’t forgotten where he’s come from and what’s put him on this cosmic path, either. The Strings playbook is actions > words, like donating 200 guitars to students at his old elementary school.

As a result, his fanbase is growing. More faces are being melted by his guitar skills. He’s being billed on mainstream music festivals like Bonnaroo, Lollapalooza, Sea.Hear.Now, and Ohana Fest, breaking out from the jam bland mold. The venues he’s playing are getting bigger and bigger. They’re even international, in scope, like a recent run in London. And, in due time, his genre-bending cultural impact is blasting into its own galaxy, beyond the orbital confines of any one particular music scene.

Just look at some of the Billy Strings stories we’ve run here at BroBible in the past year or so:

This brings us to…

Billy Strings live at the Ryman Auditorium, May 2022

On Friday, he headed north to Nashville for a three-night stint at Nashville’s historic Ryman Auditorium.

The run at “the mother church” included guest appearances with bonafide music legends, including Bob Weir from the Grateful Dead and Les Claypool, bassist of Primus fame.

Strings was also joined by mandolinists Ronnie McCoury and Marty Stuart, along with Bryan Sutton.

The run opened up with “I Am A Man Of Constant Sorrow”, the bluegrass classic made famous from the movie O! Brother Where Art Thou?. Strings was joined by his buddy Bryan Sutton, a virtuoso flatpicking acoustic guitarist and bluegrass multi-instrumentalist. Together, they played Doc and Merle Watson’s “Beaumont Rag”, along with the Kingston Trio’s “Tom Dooley”.

Strings introduced Bob Weir for the second set. The band weaved through a selection of Grateful Dead classics, including “Wake Up Little Susie”, “Cassidy”, “Help On The Way” > “Slipknot!” > “Franklin’s Tower”, “Wharf Rat”, “China Doll”, “Bird Song”, “To Lay Me Down”, and “Tennessee Jed”, with Strings and Bobby trading off on vocals.

Bobby even had jokes before the “Brokedown Palace” closer:

BIlly Strings: “I dont think we’ve ever played a full Dead set.”
Bob Weir: “I have.”

I’m very happy that this happened

During the first set, Strings introduced Les Claypool to the audience, gushing “This next fella has inspired me for years and always has been a big hero of mine and turned out to be a really cool dude.” Claypool strolled out with an acoustic dobro bass (“You have a hubcap on that thing, man!”), launching into two Primus classics – “Over The Falls” and “John The Fisherman.” Claypool also performed the ominous John Hartford classic, “All Fall Down.”

During the second set, Strings brought Bob Weir back out to perform “Mama Tried,” along with Dead songs like “Dark Star” and “Samson And Delilah.”

The show ended with Strings bringing out Marty Stuart to play Bill Monroe’s “Raw Hide”. As a curtain call, Bob Weir strolled out to perform “Will The Circle Be Unbroken” with the group.

Billy Strings shared setlists from his Ryman Auditorium shows. You can listen to Friday and Saturday Billy Strings shows at the Ryman, including the show with Bob Weir, via nugs.net. TBD on the Sunday show

What’s Billy Strings going to surprise us with next?

Who knows – Keeping us on our toes is just a part of the fun.