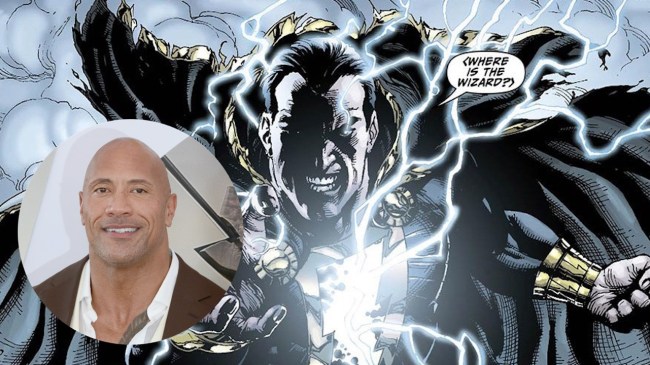 Given that the comic book movie revolution has been underway for over a decade, it’s frankly shocking that the world’s biggest movie star, Dwayne “The Rock” Johnson, has yet to enter the fray.

Arguably the last true action star on planet Earth, given that The Rock essentially saved the Fast & Furious franchise and has the ability to turn half-ass films like San Andreas into half-a-billion-dollar movies, you would think Marvel Studios would have been first in line to sign up his services.

Alas, Johnson ultimately got nabbed up by DC and Warner Bros. as Shazam! anti-hero Black Adam, a relatively unknown character to the average movie-goer. But, because The Rock is The Rock, it’s likely that whenever he does suit-up as Black Adam, the movie will make close to a billion dollars.

Despite being cast as Black Adam all the way back in 2014, development on the project has been slow due to the up-and-down nature of the constantly reshuffling DCEU. But now, following a successful run of projects that includes Wonder Woman, Aquaman, and Shazam!, the DCEU has seemingly finally righted the ship, allowing for Black Adam to finally come to the big screen.

While speaking to Collider during a Hobbs & Shaw press junket, Hiram Garcia – the president of Johnson’s production company, Seven Bucks Productions – revealed that Black Adam would begin production in late 2020.

“The success of Shazam! was awesome for us and it was important for us to launch that, get that out into the world and begin crafting this universe. It’s a big thing for us to create this universe, this DC section of the universe, with characters we have planned to bring into it, headlined by Shazam and Black Adam.”

“Jaume Collet-Serra, he just closed his deal, which we’re very excited about, and the plan is to begin filming that end of next year.” [Collider]

With a late 2020 production date, Black Adam will likely be scheduled for 2022.