Big Black Bear Makes Itself At Home In Couples Kitchen, Has Itself A Little Snack: Watch 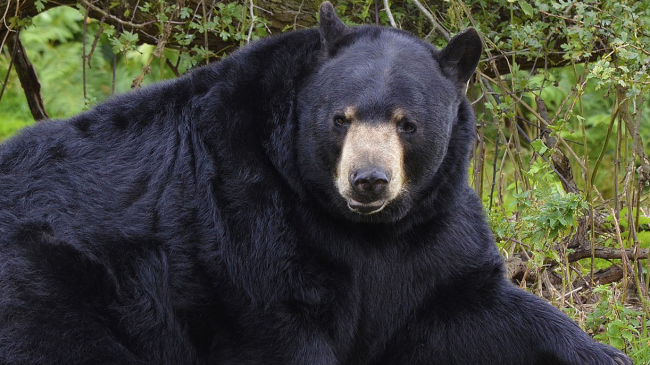 A big black bear was caught on video recently after it entered a couple’s home, walked into the kitchen and had itself a snack.

The unusual encounter took place at the home of Bill Priest and Christine Vannie in West Hartford, Connecticut last week.

The couple were listening to some music and doing yard work on their front lawn that morning when Bill went inside to grab a drink.

When he entered the kitchen, much to his shock, a big black bear was chilling in there having itself a little treat, eating some marshmallows and peanut butter crackers that had been left on the counter.

“He had everything on the floor in there eating,” Bill told WFSB News.

“I came in through that door and I got to the doorway and he was right there. When he saw me he ran over there,” said Bill. “He did startle me that was probably the one time I was scared.”

“It took some convincing to get him to leave,” Christine wrote about the bear encounter on Facebook.

The bear, after leaving through the front door, tried getting back in through the rear of the home.

The following day, the same bear tried to get into the home again, ripping the screen from the front door then trying again at the back, shaking a set of French doors.

“I was holding it, he was pushing,” Bill told We-Ha.com.

“We’ve been having bears for years, but this is the first time they’ve ever done something that’s damaging to anything,” said Bill. “So, I was mad I was really mad.”

The couple eventually contacted the Department of Energy and Environmental Protection, who dropped off a trap. Their plan was to catch the bear, sedate it, tag it, release it and use hazing techniques – shoot it with a paintball gun, and make loud noises – to try and condition the bear into thinking that the house is a bad place to be.

Baited, tested, set, and ready for the bear to take the bait of … stale @dunkindonuts outside #WestHartford home. Full story to come! @CTDEEPNews pic.twitter.com/e4OvwsI82A

The couple says they have had numerous run-ins with bears during their 18 years in the home, and have even seen this particular bear before.

The week before this bear encounter, Bill says one got into their garage and was going through the fridge after bending the doors to get it open.

“I mean, I don’t care, run around the yard all you want, but now you’ve crossed the line,” Bill told WFSB News.