Here Are (Almost) All Of The Easter Eggs Hidden In ‘Black Mirror: Bandersnatch’ 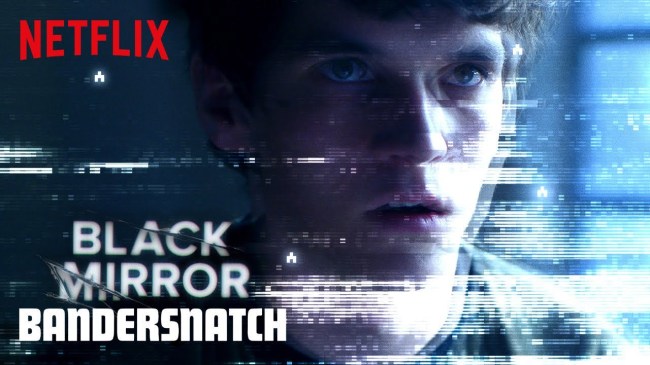 There are so many Easter eggs in Black Mirror: Bandersnatch it’s basically impossible to catch them all. So, because we care and to save you time, here is a list of (almost) all of them. How many of these did you actually notice?

I mean, considering the fact that Netflix had to create a whole new computer program to make Bandersnatch a reality, how are we ever supposed to find all the Easter eggs, let alone all of the possible endings?

The game Nohzdyve refers to the season three episode titled, you guessed it, Nosedive, which also just so happens to be an actual game you can play (if you are very, very handy with computers).

BREAKING: You can actually play 'Nohzdyve', one of the games from Black Mirror: Bandersnatch, on your Spectrum. They even created a retro-looking #Tuckersoft website for the purpose, this is insane! #Netflix #ZXSpectrum #Bandersnatch #80s #easteregg https://t.co/x6XhnW5GxB pic.twitter.com/tqBJmwUDTT

At the bottom there's a banner ad. Click it and you'll get an option to rate yourself or others like in the Nosedive episode!!#blackmirror #bandersnatch pic.twitter.com/pl9gArvWFu

That newspaper report about Stefan killing his dad was replete with references to previous Black Mirror episodes.

The “Love Machine” calls back season four episode “Hang the DJ.” It is created by BRB, which refers to season two’s “Be Right Back.”

In another part of the movie, while Pearl talks about rebooting Bandersnatch a news scroll mentions a Space Fleet cast reunion at the Emmy Awards ceremony.

Annnd… Valdack from “USS Callister” also has his very own video game, according to the poster on Stefan’s bedroom wall, inside the world of Bandersnatch.

The place where Stefan visits Dr. Haynes is a medical building named Saint Juniper’s. And if you haven’t watched season three’s Emmy Award-winning fourth episode, San Junipero, you are really missing out.

The place where are the games are produced, Tuckersoft, is a reference to TCKR, a tech company that shows up in several Black Mirror episodes including “Playtest,” “San Junipero,” “Metalhead” and “Black Museum.”

White Bear, from the second episode of season two of Black Mirror, was probably the most obvious.

black mirror is a giant easter egg. did y'all recognize the sign from bandersnatch is the same one from white bear pic.twitter.com/lrdVuNszHF

No way you caught the reference to former Prime Minister Michael Callow from the very first Black Mirror episode, right?

That same news crawl also says “Granular to Unveil Prototype Pollinator Drone” which is a definite reference to “Hated in the Nation” from season three.

And here’s a mind-blower, Bandersnatch the game was referenced in previous Black Mirror episodes.

In the Black Mirror episode PLAYTEST from Season 3, the fake Edge Magazine mentions Bandersnatch on the cover.

I can't believe you knew about this @dannytrs and have been holding out on us this whole time. pic.twitter.com/GGR3s3Nsdc

Then there was this…

Did anyone else pick up on Dr R Haynes in #Bandersnatch & Rolo Haynes in Black Museum? Related? Easter Egg? 🤔🤔

Since I was really impressed with the #bandersnatch QR code Easter egg, I decided to look up the inspiration for it. Turns out, it was The Thompson Twins that did this originally, who also happen to be featured in the movie! Mind blown. https://t.co/krz0nHreGR

Get all that? If not, maybe this video will help.

Okay, so which Easter eggs did I miss?