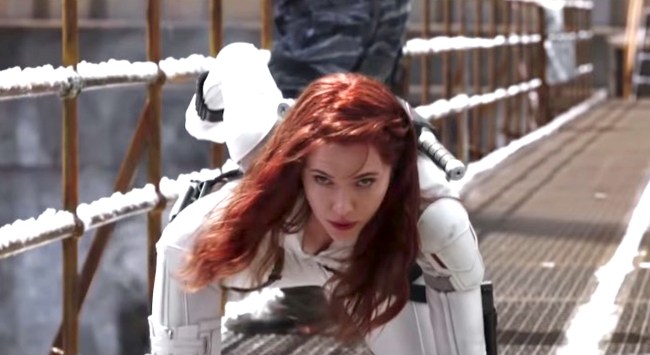 There are certain celebrities who have been in our lives for so long that their current age is somewhat astounding. For example, the likes of Britney Spears, Beyonce, and Justin Timberlake — who have more or less been in the public eye for my entire life — are just 38-years-old!

Same goes for Scarlett Johansson, who — despite starring in movies for as long as I can remember watching them — is some 35-years-old? That means she was just 25-years-old when she made her Marvel Cinematic Universe debut in Iron Man 2. What in the fuck, indeed, folks. Time is a flat circle, let me go spin my Inception totem, all that good stuff.

And for all that time — since she was a 25-year-old up and comer to now being a 35-year-old two-time Academy Award-nominated actress — she’s been whooping some serious fucking ass as Black Widow, as she ranks tied-for-fourth in all-time MCU appearances with seven (!), behind only Iron Man, Captain America, and Nick Fury.

Unfortunately, though, for fans of both the MCU and Johansson (which I’d estimate is roughly 80% of the male population), her eighth MCU appearance may be her last after she ***SPOILER ALERT*** yeeted herself off of that Vormir cliff in Endgame.

Nevertheless, because they have the license to print money, Marvel Studios decided to give the MCU mainstay a proper send-off with her first solo film, and by the looks of it, it’s going to feature tons of Johannson whooping absolute ass, which frankly never gets old.