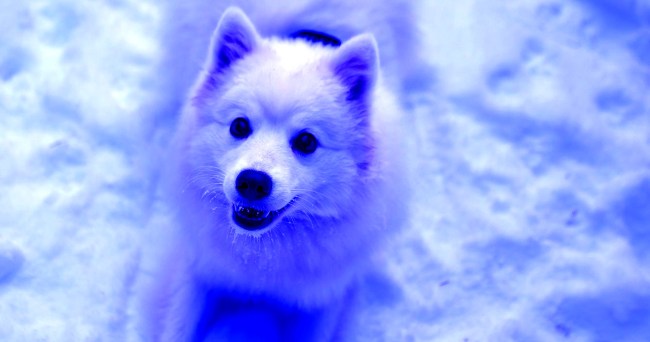 You may have heard of dogs like the Kerry Blue Terrier or the Blue Lacy, but the strange blue dogs that have suddenly appeared, roaming the streets in the city of Dzerzhinsk, Russia, are neither of those types of canines.

The dogs with bright blue fur have drawn the attention of Humane Society International after photos of the pups went viral on social media.

Blue dogs were spotted near an abandoned chemical plant at Dzerzhinsk in Russia's Nizhny Novgorod region.strange colouring may caused by chemical waste such as copper sulphate.vibrant blue coats not a happy one.much concerned issue. it may cause health issues to them#saveanimals pic.twitter.com/USBGSkKupB

According to Kelly O’Meara, Humane Society International’s Vice President of companion animals, the fact that these dogs are the color blue is a problem.

“This situation with street dogs living near an abandoned chemical plant in Dzerzhinsk, Russia, has shown a very obvious welfare issue through the discoloration of their fur,” O’Meara told Newsweek.

“The dye on their fur implies they have had direct contact with or even ingestion of potentially toxic or harmful substances. This could result in painful skin burning or itching or internal bleeding and illness that could lead to death, without veterinary intervention.”

Related: Why Do Dogs Like To Sniff People’s Crotches? A Doctor Explains The Strange Behavior

They found some striking blue dogs in Russia, in the city of Dzerzhinsk an event occurred that puzzled more than one, they found a herd of dogs that aroused their astonishment, since they all had blue fur. pic.twitter.com/wu1GaAqUV9

The dogs may have been exposed to chemicals at a nearby abandoned factory that produced plexiglass and hydrocyanic acid, giving their fur the eye-catching blue color, observers said.

Of course, The Moscow Times also reports that “animal rights activists” claim these dogs’ health is not in danger, have been examined by veterinarians, and some have already found new homes.

Those “animal rights activists” don’t appear to be from Humane Society International, as O’Meara informed Newsweek, “To date, authorities in cities across Russia have not implemented effective, humane strategies to address their street dog populations, and can often resort to cruel and ineffective methods of control.

“We encourage them to adopt sterilization/vaccination programs to enhance the welfare of these dogs and to avoid the both accidental and intentional hazards and cruelty they often experience.”

As mentioned, RIA Novosti said it spoke to the bankruptcy manager of Dzerzhinsky Plexiglas, where stray dogs have turned the many abandoned buildings into their homes, and he said, “Homeless dogs are running around the territory. Perhaps, in one of the buildings they found the remains of some kind of chemistry – copper sulfate, for example, tumbled into it. Several years ago, I heard, noticed that some dogs were painted in some unnatural colors. They also found something, no one controls them. I cannot bear the costs of catching homeless animals and their sterilization.”

Authorites in the area are reportedly negotiating permission from the company to catch the blue dogs, in order to help them.

Earlier this month, several green dogs appeared in Podolsk, Russia and the Society for the Protection of Animals Zooschit told RIA Novosti that the dogs had only gotten into some paint and that the paint was non-toxic and would eventually wear off the animals.