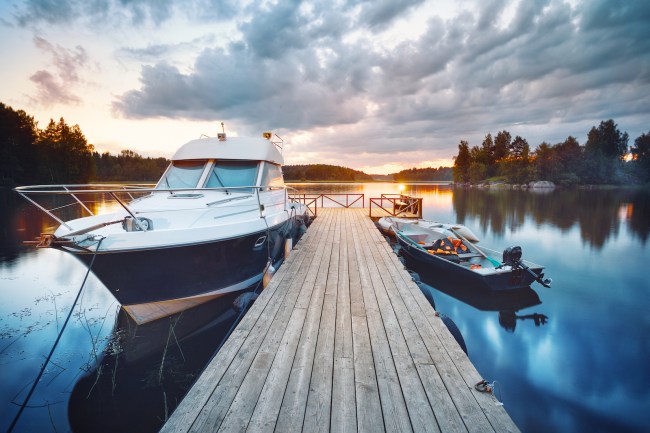 “In a pond of drunks, everyone is sober.” – a sage man

The summer boating season has finally arrived. We’re not going to lie, but getting to this point has been a living Hell.

Perhaps the same as many of you, we were forced to endure the grey, drab and depressing winter months, the holidays and even a schizophrenic spring before the weather sorted itself out enough so we could finally put on a goddamned pair of shorts.

Not even the perpetual shit-faced state we have been wallowing in since last Labor Day has been enough inspiration to keep our minds right. What we’re trying to say is summer, what took you so long? Indeed the wait is over.

It’s when thousands of nautical enthusiasts, as well as the average, loud-mouthed party hound, will hit the American waterways in a quest for happiness through the diminishing of brain cells and women wearing close to nothing.

The only downside to this soggy soiree is that there are sometimes accidents, law enforcement shakedowns and other bizarre, unforeseen “oh shit” moments that can ruin the experience.

So, in the interest of good times for all – and because National Safe Boating Week kicks off on Saturday — we’ve assembled a short list of Boating Safety Tips for Bros.

It might not save your ass entirely, but hey, it’s better than nothing.

If you listen to the Department of Natural Resources (DNR), its main advice for boaters is to always wear a life jacket.

Apparently, this is because nearly 80 percent of all boating-related fatalities involve drowning. And we’re not talking about the kind that happens when a keg stand goes wrong either.

But let’s face facts, cruising around on a motorboat with a life jacket on at all times is no way to enjoy summer. Not only will this give the women folk the impression that you’re some unfuckable chump, but those tan lines are going to be a farce.

If you thought walking around with a farmer’s tan was embarrassing, just try one that says I am the bitch-of-the-sea!

But we do recommend keeping life jackets aboard the vessel at all times. In fact, it’s the law in most jurisdictions. Furthermore, you can put those bastards on like a diaper and float around comfortably in the lake while drinking beer. Yep. This just might be the best boating tip you’ll get all summer long.

Whatever you do, let common sense prevail when it comes to life jackets. If you’re in the middle of the goddamned ocean or on other rough waters, by all means, wear some kind of flotation device. Safety should always come first. Well, you know, make sure to ice down those beer coolers before anything, but gathering enough life jackets for everyone should be the next priority.

Boat As Sober As Possible

If the DNR had its way, everyone on a ship this summer would be as sober as a judge. This is because they say a passenger is around 10 times more likely to fall overboard and drown if they’ve been drinking.

But getting out on the water without sips and suds to compliment the fun sounds like a real lame-ass time if we’re honest. Most deep-sea drunkards would agree with us. It’s the reason you would be hard pressed this summer to find any living thing on the water that won’t blow at least a 0.6 on a Breathalyzer.

That includes dogs and small children. We see you out there, Kentucky!

Just know that Cop yachts can come along at any time and bust your ass for operating a boat under the influence of alcohol.

Being stoned on the water is not something that they appreciate either. With that said, it is essential to understand that the water law probably isn’t going to fuck with you too hard as long as your crew isn’t out there acting like a bunch of drunken imbeciles.

Remember, you don’t have to be a sober boater. You just have to hope there is another one out there way more fucked up!

Take Along Plenty of Supplies

Although it is smart to make sure your boat has been serviced and is in tip-top running condition before putting it in the water, it is also equally important to make sure the vessel is stocked up with plenty of vital supplies.

Some of these things are a no-brainer: Take your cell phone (keep it in a waterproof case or plastic bag), a first aid kit, fire extinguisher, and life jackets. Check, check, check, and check.

It is also not a bad idea to take along plenty of snacks (those maritime munchies can be brutal), a roll of toilet paper, dry towels, a clean pair of shorts (you just never know) and plenty of sunscreens.

Toss a few trash bags aboard too, so you can keep the deck free of incriminating evidence. The last thing you need if you happen to attract the attention of a conservation officer is the boat to looking like a homeless person has been using it to collect beer cans.

Also, try making room in the coolers for some bottled water. Rest assured by the end of the day somebody in your party is going to be drunker than the witness at a Vegas wedding and looking to hydrate.

In all seriousness, taking the time to plan out your boating excursions this summer will only enhance the good times and keep you safe in the process. It should be known that there are online boating safety courses available just in case our less-than-comprehensive guide for Boating Bros doesn’t fill you with a sense of security.

Hey pal, we never claimed to be armed with expert seamanship. We’re just a bunch of fuck-ups who have done some dumb shit in our time and gotten into our fair share of trouble with the law.

And there is nothing in shit’s holy name safer than staying out of jail.