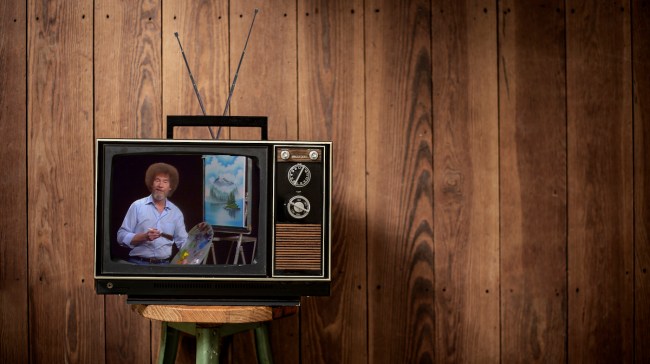 Seconds after the studio lights shine on Bob Ross, and his brush hits the canvas, the lights go out in my head.

The opening tune – titled “The Joy of Painting Interlude” – was written by Larry Owens. Owens has a hand in countless classic themes over the last few decades, including The Bold and the Beautiful and The Greatest American Hero.

I’ll fall asleep seconds into an episode and wake up to find a snow-covered cabin in the woods, a lake surrounded by multi-colored foliage, or a majestic mountain that might or might not exist somewhere in the United States.

The nap routines began after taking a side job delivering for a bakery starting at 4:30 am every morning. Even on days off, the internal alarm goes off, and the body wakes up simultaneously. Trying to go back to sleep is pointless.

My mental sluggishness kicked in around noon each day, providing an obvious signal I needed a power nap.

The only way to fall asleep – especially after drinking multiple caffeinated beverages throughout the morning – is to bore myself to sleep.

The idea was to watch something interesting, but not interesting enough to keep me awake. Bob Ross’s voice is soothing, and the shushing of the paintbrush knocks me out within seconds. Numerous times, I didn’t make it through the theme song.

My first memorable experience with ASMR – though it didn’t have a name at the time – happened in a barber’s chair in my late teens. The barber trimmed the hair around my ears, and goosebumps covered the back of my head and parts of my arm.

The moment replayed in my head every time the goosebump feeling reoccured throughout my life. The term ASMR hit my radar screen sometime around 2017, after stumbling upon a complete chiropractic exam video. Around the same time, my marriage was splitting up.

ASMR – an acronym for autonomous sensory meridian response – is a feeling of peacefulness or well-being combined with a tingling sensation, typically down the scalp and the back of the neck. This feeling is typically experienced in response to a specific but gentle stimulus, often a particular sound.

One defining characteristic of ASMR is that all of the sounds are made within close proximity of the listener, explaining my goosebump moment in the barber chair.

“Close attention” is a recurring theme in ASMR videos, as the video host will hold objects near a special microphone that picks up the slightest sounds.

Unable to sleep while going through a separation in 2017, my typical soothing voices at night belonged to chiropractors, Indian head massagers, barbers, and soft speaking sugar dealers. The inability to fall asleep or stay asleep led to my discovery of the Alexander Technique, telepathic healing, and soccer announcers making sandwiches.

These instructional activities are typically administered by soft-spoken individuals in tranquil surroundings.

A 2019 New York Times article estimated that over 200 videos showing ASMR triggers are posted to YouTube every day, with some ASMR YouTubers becoming online celebrities.

No human truly gets enough sleep. The lucky few among us to hit the sack early and wake up refreshed in the morning are a rare breed.

Covid-19, quarantining, and the stress of working from home while homeschooling kids is keeping millions up at night. These life changes have created a dilemma researchers call the “perfect storm of sleep problems.”

The pandemic created an uptick in complications such as short-term insomnia and exacerbated other serious health issues, including diabetes, cardiovascular disease, and hypertension.

I’m hardly companionless in my use of Bob Ross as a sleep device. In fact, the second result search result for Bob Ross on YouTube is “Bob Ross ASMR.”

Ross, even in the show’s earlier seasons, seemed well aware that some people were tuning in for a half-hour of peace and not just to mix Alizarin Crimson and Cadmium Yellow.

Every episode begins much the same way. Ross explains in the warmest tone that the painting for the day is a “fantastic little piece” (spoiler – he thinks every piece is fantastic) and encourages viewers to grab an easel and paints and paint along. For those uninterested in painting, Ross encourages pouring a cold glass of ice tea, relaxing in a favorite easy chair, and enjoy nature’s landscapes on canvas.

Ross was peddling relaxation with each masterpiece.

Twenty-five years have passed since the PBS host passed away due to lymphoma complications back in 1995, but the soft-spoken former master sergeant in the United States Air Force is more popular now than ever.

The official Bob Ross YouTube page has 4.4 million subscribers. His most popular video – “Island in the Wilderness” – boasts over 32M views.

While some people still devour his videos to learn to paint – a $1.2 million painting workshop was built in Carmel, Indiana, the city where Ross filmed all the episodes of “The Joy of Painting” and fans pay for the “Bob Ross experience,” I’m fairly certain millions of the YouTube views are people yearning for something besides wet-on-wet painting techniques.

“Bob Ross is not just a good artist with a nice voice; he’s an inspirational legend,” wrote Elizabeth in the comment section of the Island in the Wilderness video. “Watching his videos makes me feel like I can do anything. They have gotten me through some tough times, and they’re one of the only things that are able to calm me down when I’m feeling anxious or sad, and nothing else is working. His positivity and gentle artworks will always live forever in our hearts. Thank you, Bob!”

“This man was an amazing painter, but he also basically invented ASMR,” commented Damien House on another YouTube video.

ASMR junkies are typically on the hunt for the elusive “tingles” – those shivers up and down the body similar to goosebumps and the overwhelming feeling of calm in the body. The tingles are the reasons videos of people talking softly, crinkling paper, giving massages, and tapping fingers are so beloved and abundant online.

The technique is growing so popular – especially on YouTube – that advertisers are even incorporating soft voices, tapping, and other techniques into TV commercials.

A 2018 study out of the University of Sheffield found that “those who experience the phenomenon had significantly reduced heart rates while watching ASMR videos compared to people who do not experience ASMR” while an earlier study concluded that some people find experiencing ASMR helps “relieve negative mood symptoms, including feelings of depression or stress” and may even reduce chronic pain in some patients.

While ASMR videos are an acceptable relaxation technique – and suitable for reducing stress before bed – most sleep doctors don’t recommend these videos as an actual sleep aid. Especially for patients with chronic sleep issues.

One might assume that ingesting these videos for hours at a time every night would push me towards wanting to actually try a head massage in a foreign land, improve the way I get up from a chair, let a telepath work on my aura or chakras, or paint at least one damn cabin.

I have zero interest in these activities in real life. I would, without a doubt, display a Bob Ross painting in my house.