The Official Title For The ‘Borat’ Sequel Is Predictably Insane 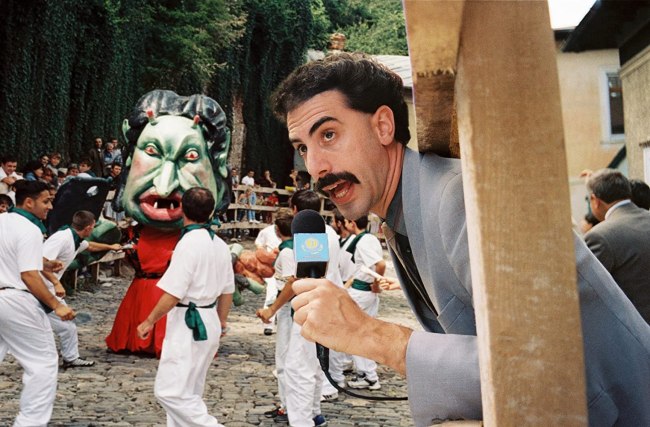 A few weeks ago, after Sasha Baron Cohen was spotted driving down a California highway in full Borat regalia, news broke that not only was a sequel to the 2006 cult classic Borat in the works but that it’d already been shot and screened for Hollywood executives. As the man himself famously said, very nicceeeee.

While plot details are obviously being kept under wraps, reports from Collider indicated that the plot will revolve around the fact that “the public knows who he is now, so he has to go “undercover” to interview people.” Additionally, one Collider source described the film as “Cohen playing Borat playing Cohen”, which sounds like the exact sort of bizarro humor that Baron Cohen became known for.

Given the obvious meta and bizarre nature of the Borat sequel, it should come as no surprise that its official title is as equally insane. That’s right, the title for the upcoming Borat follow-up is Borat: Gift of Pornographic Monkey to Vice Premiere Mikhael Pence to Make Benefit Recently Diminished Nation of Kazakhstan. **chef’s kiss**

The overly-elaborate title is certainly nothing new, as the original 2006 classic was infamously titled Borat: Cultural Learnings of America for Make Benefit Glorious Nation of Kazakhstan.

As previously mentioned, while plot details are being kept a secret at this time, the fact that Vice President Mike Pence’s name appears in the title means that the man-who-can’t-be-around-women-without-his-wife-present will likely factor into the story itself. One can only hope that Sasha Baron Cohen somehow convinced these idiots to appear on camera with Borat.

The last time we saw Sasha Baron Cohen in Showtime’s Who Is America?, he was conning clueless conservatives into making fools of themselves and hopefully Borat: Gift of Pornographic Monkey to Vice Premiere Mikhael Pence to Make Benefit Recently Diminished Nation of Kazakhstan is more of the same.