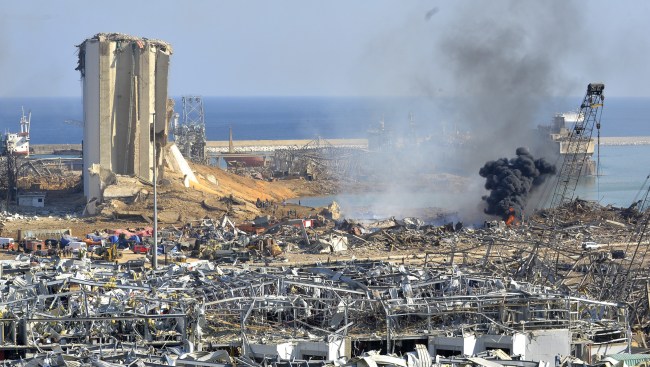 An explosion of still unconfirmed origin which rocked the city of Beirut on Tuesday, leveling numerous buildings, wounding over 5,000 people and killing least 135 people, was caught on video by a photographer shooting wedding pictures of a bride in the vicinity of the port at the moment it occured.

In the video, the camera begins circling the obviously and rightfully very happy bride, when out of nowhere the blast, suspected to have been caused by an estimated 2,750 metric tons of ammonium nitrate stored in a nearby warehouse, creates an absolutely terrifying scene that looks like something straight out of the apocalypse.

This bride was taking wedding photos yesterday as the explosion happened in Beirut…pic.twitter.com/2eh1eYQut8

Beirut port today. The original fire could be what Lebanese official said as "a ship carrying fireworks". But the second detonation is very similar to explosives.pic.twitter.com/PmDfHZTcda

The thousands of tons of ammonium nitrate that Lebanese officials are blaming for the huge explosion arrived in the city aboard an ailing, Russian-owned cargo ship that made an unscheduled stop in the city more than six years ago.

Lebanese customs officials wrote letters to the courts at least six times from 2014 to 2017, seeking guidance on how to dispose of the highly combustible material, according to public records cited by a Lebanese lawmaker, Salim Aoun.

A similar ammonium nitrate explosion took place in Tianjin, China in 2015 killing 173 people and injuring over 800.

Left: crater from the 2015 Tianjin explosion in China, caused by 800 tons of Ammonium Nitrate.

Here’s a fertilizer warehouse explosion from West Texas in 2013. If this warehouse was in downtown Dallas it would have leveled the city. pic.twitter.com/BrJrN4i4mq

One certainly has to wonder how and why with this prior knowledge of the devastation that can be caused by storing so much ammonium nitrate in one location anywhere near where people are located is still allowed and still done in this day and age.