Brie Larson Barely Makes To The End Of The Hot Ones Challenge, Reveals Serious Geek Tendencies 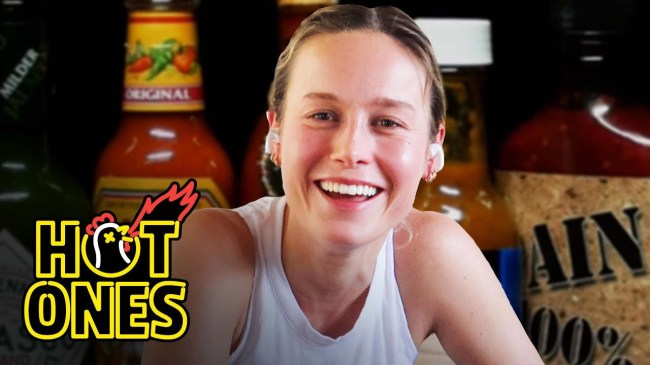 Despite everyone still not being able to go out and do normal things, like meet face to face with First We Feast host Sean Evans and eat some ridiculously spicy hot wings while he asks questions – you know, normal things – one time aspiring pop star turned Captain Marvel Brie Larson was still able to partake in the latest episode of Hot Ones.

Granted, we don’t get the usual high production value video we would normally get, but in some ways this is almost better because we get to see this episode’s star in what appears to be her own home.

During this latest trial by fire, Larson, who obviously has not watched enough episodes of Hot Ones to know that there is no point in wearing a coat or sweater because at some point during the process it will be coming off, discussed many things.

Among them were topics like the fact that she struggles with technology (she claims to watch a lot of Vine videos… huh?), the fact that she’s starting her own YouTube channel (her first video was posted today)…

Larson also talked about her deep love of mushrooms (no, not that kind), why she believes Super Mario 3D World is one of the greatest achievements in Nintendo history, moonlighting as a DJ early in her career, her obsession with Star Wars, and a LOT more. It really is quite the wide-ranging interview.

That was followed by her telling Evans after her next bite of a wing, “This is, like… what I imagine it feels like to change form as Pokemon.”