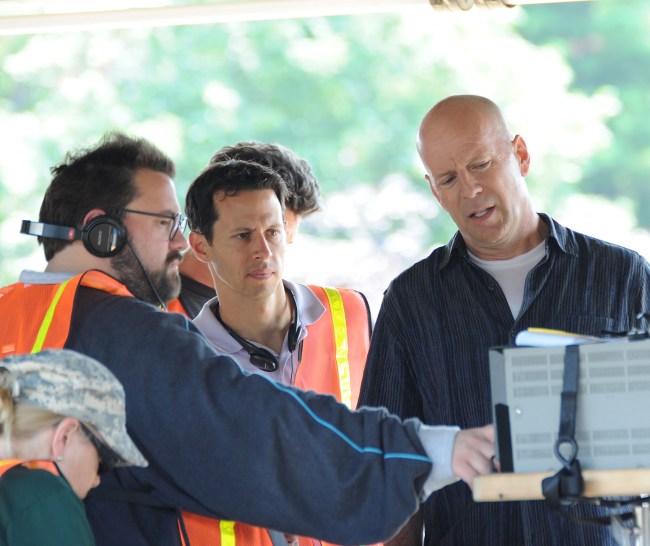 Remember that 2010 movie Cop Out? If you do, I’ve hope you worked out the trauma with a therapist, because the Bruce Willis-starring action comedy was a skid mark on director Kevin Smith’s legacy. Critics called it, “Joyless, pointless, humorless.” It didn’t make back its $55 million budget back, and maybe most importantly, led to a public falling out between Smith and Willis.

Back in 2011, Smith blasted Willis on Marc Maron’s podcast, claiming that working with the action star on Cop Out was “soul crushing.”

Smith bitched out Willis for not buying into the process: “one guy wouldn’t even sit for a f*cking poster shoot.”

“Everyone knows who it is.  Put it this way, remember the really funny guy in the movie?  It ain’t him.  He’s a f*cking dream.  Tracy Morgan, I would lay down in traffic for.  Were it not for Tracy, I might’ve killed myself or someone else in the making of that movie.”

Smith recalls a particularly funny incident when they had just finished a take, and Bruce Willis waved Smith over saying they weren’t done yet. Smith joked, “Ok, everybody, hold on one second. I’m going to go talk to the director.” Willis then asked Smith to clear the set, and after the set was cleared, asked him, “Do you want to take a swing at me?” Smith recalled that he felt like he was in a Die Hard movie.

When shooting wrapped, Smith reportedly toasted the crew by saying, “I want to thank everyone who worked on the film, except for Bruce Willis, who is a f*cking dick.”

It’s not hard to picture Bruce waking up everyday and throwing darts as a cardboard cutout of Smith’s face, but in an unlikely turn of events, the two have turned their relationship around, thanks to an out-of-the-blue text message Willis sent his former director.

Smith closed out the most recent episode of Fatman Beyond by telling the story:

“Time heals all f***ing wounds,” he teased. “I got a text this morning from a number that I’ve seen pop up on my phone quite regularly like every few weeks,” he explained. “I only answer numbers I know.”

He goes on to explain that after a few missed calls, the number then popped up as a text. Here’s what it said: “Dear Kevin, I have pictures I want to send you. I need your home address. Love, Beedub.”

After contemplating who that could possibly be, Smith realized he only knows one “BW,” so he replied: “Bruce?”

Smith then asked Bruce if he could call him, and the two talked for 10 minutes, not once mentioning any of the “friction” that occurred over Cop Out. Smith described the encounter as “fucking lovely” as well as “fucking strange.”

“Reach out to an old friend or to someone you never thought would be a friend again,” Smith advised. “You never know what bridges you can mend.”

Willis and Smith should collaborate on a movie about their beef and making amends. Probably be better than that Cop Out abomination.