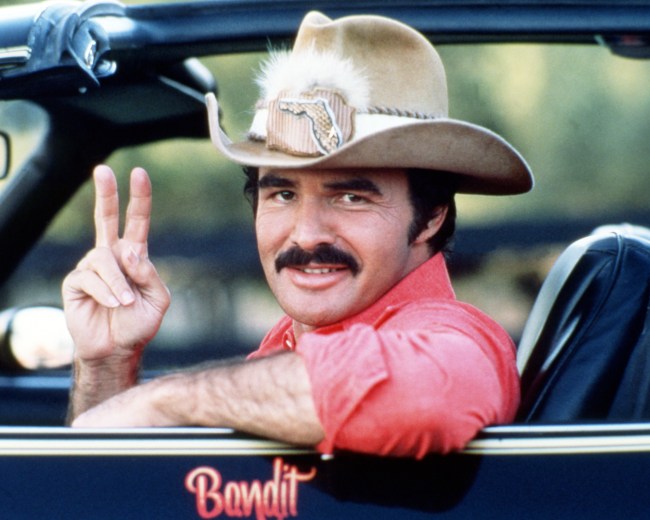 If there were a Mount Rushmore of American muscle cars, the Pontic Firebird Trans Am would be up on that mountain. Everything from its piercing design to its roaring V-8 engine, the Firebird Trans Am checked all of the boxes when it came to making an iconic muscle car.

This Pontiac Firebird was Burt Reynolds’s car of choice in the 1977 film Smokey and the Bandit. Playing the bootlegger Bo “Bandit” Darville, Reynolds received widespread acclaim at the box office. The film was so popular that some say it contributed to Trans Am sales almost doubling within two years of the release.

I recently wrote about how Barrett-Jackson was auctioning off the iconic Mirthmobile from Wayne’s World. It turns out the auctioning site is also putting up the exact Pontiac Firebird once owned by the late Reynolds.

The Firebird up for auction isn’t the same one that appeared on the screen. This specific Firebird was actually a promotional-edition car gifted to Reynolds as thanks for Smokey and the Bandit‘s success.

Reynolds reportedly only drove the car on rare occasions and kept it at his home in Jupiter, FL. He sold it in 2014, to which the second owner restored it to mint condition at a shop in Dallas, TX.

This Starlight Black-and-Gold 1977 Trans Am Special Edition was gifted to Burt Reynolds as a "thank you" for his part in the vehicle's success. As Reynolds's sole '77 Trans Am with iron-clad provenance, this "Smokey and the Bandit" is offered during the 2022 Scottsdale Auction. pic.twitter.com/NRpvPUAcVu

A 180HP 400ci V8 engine sits under the hood. The transmission is an M40 3-speed automatic. What’s cool is the second owner of the Firebird had the iconic “Bandit” hand-painted on the doors and refreshed the gold striping and lettering.

What’s Included in the Final Sale

Not only will the highest bidder acquire this legendary piece of pop culture history, but they will also receive an autographed copy of Burt Reynolds’ autobiography and a vintage 70s Trans Am jacket.

Also included are the “Bandit” cowboy hat and a special engraved plate in the driver’s door that verifies the existence of this one-of-a-kind car.

The 1977 Pontiac Firebird is currently up for auction as we speak at Barrett-Jackson. Stay tuned as we wait for the final sale price to be announced.