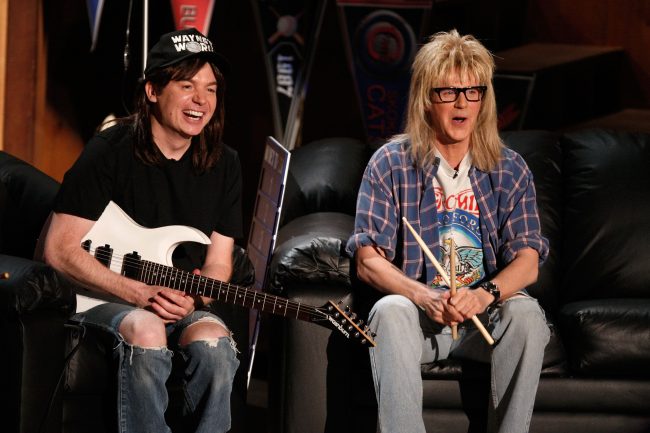 When it comes to 90s cult classics, Wayne’s World is one of the first films that come to mind. The story of Wayne and Garth’s basement talk show rising into the network television circuit is a feel-good comedy that resonates still to this day.

Remember how spot-on they were with the future bombardment of advertisements in the pop culture industry? Wayne mentions “I will not bow to any sponsor.” as he’s holding a Pizza Hut box. To which Garth adds, “It’s like people only do things because they get paid, and that’s just really sad.”

Speaking of money and people getting paid, the original 1976 Pacer movie car from Wayne’s World is up for auction right now at Barrett-Jackson’s in Scottsdale, Arizona.

The Mirthmobile is an iconic, and ironic, piece of Hollywood memorabilia: Garth’s Pacer from ‘Wayne’s World’ returns for Barrett-Jackson auction.https://t.co/3WIgFPUI5l pic.twitter.com/2kur08aOOh

Garth’s quirked-up, modified coupe became just as much an icon as the movie itself. The Mirthmobile, as it’s called, notably makes its most legendary appearance in the “Bohemian Rhapsody” car karaoke scene.

It can also be spotted in the airport scene where Wayne and Garth contemplate life’s greatest questions as a plane takes off right over them.

Love it or hate it? #OnThisDay 1979, the last AMC Pacer, “the first wide small car”, rolled off the production line.

The 1976 Pacer coupe contains a 258 cubic-inch 6-cylinder under the hood. Features like the mismatched chrome spoked wheels and licorice dispenser are still intact, as well as its welded tow hooks. What’s been added, however, is a stereo system with 10-inch speakers, making it ready for some more enhanced rocking out.

As far as price the car is taking bids with no reserve. Based on the Pacer’s tie to pop culture history, we’re sure the final selling price will be significant.

The real question is, would you spend your dollars on a super sleek sports car, or the Mirthmobile? We’re going with the Mirthmobile ten times out of ten.