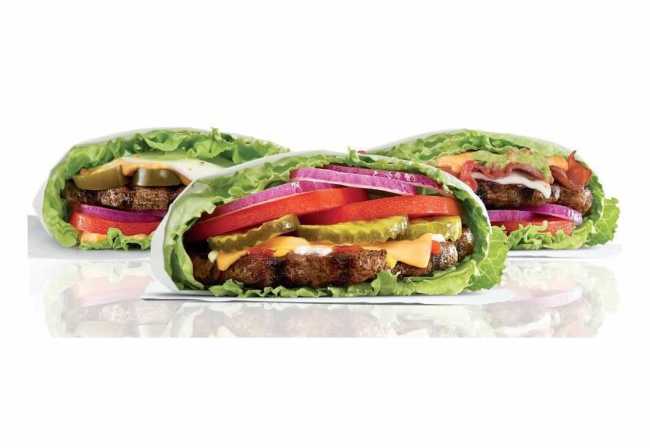 Presented in partnership with Carl’s Jr.

When I was still at a point in my life when staying up until midnight was the ultimate novelty as opposed to something I inadvertently do most weekdays, there weren’t many occasions I looked forward to more than New Year’s Eve. Over the years, though, it’s slowly lost its luster, and now that I’m too washed to know any of the “hit songs” performed on the broadcasts that culminate in a countdown that primarily reminds me I’m powerless to combat the inevitable passage of time, the holiday just kind of bums me out.

This year, however, I’m filled with a sense of anticipation that rivals what I felt ahead of the night where I crushed two bottles of sparkling apple cider by myself as people around the globe waited with bated breath to welcome in the new millennium. I know the world won’t magically change the second 2021 rolls around, but it’s impossible to articulate how big of a relief it will be to bid farewell to a year that gave our lives the same treatment Will Smith got when a couple of guys who were up to no good started making trouble in his neighborhood.

My abysmal ability to stick with New Year’s resolutions is usually enough to stop me from making any in the first place, but this year, I’m going to be slapping the reset button harder than an overzealous contestant on a game show when January 1st arrives. Based on how many areas of my life are sorely in need of improvement, I think my best bet is to put together a diverse portfolio of some of the most popular goals—including finally sticking to the dietary regimen my doctor thinks I follow as opposed to the atrocious eating habits I’ve had for far too long.

As much as I like to think I’ll be able to flip the switch and suddenly become a Salad Guy, I’m not delusional enough to think that’s actually going to happen. As a result, I was thrilled to discover I’ll have an ally in my corner thanks to Carl’s Jr., which offers a helping hand to people like myself with a few clutch craveable items on its menu that will help you “Feed Your Happy” in the new year.

Whether you’re setting out on a quest to familiarize yourself with something called “vegetables” or have decided this is the year you get out of the unhealthy relationship you have with carbs, Carl’s Jr. is doing what it can to make that transition a bit easier with a trio of lettuce-wrapped burgers, the Carl’s Jr. take on a salad that feature some killer flavor combinations and a little less guilt than their bun-based counterparts.

With these menu options, Carl’s Jr. offers an interesting proposition to the customer: Anything can be lettuce wrap.

By rolling out a better-for-you menu for the new year, Carl’s Jr. is offering an interesting proposition to the customer: Anything can be lettuce wrap. 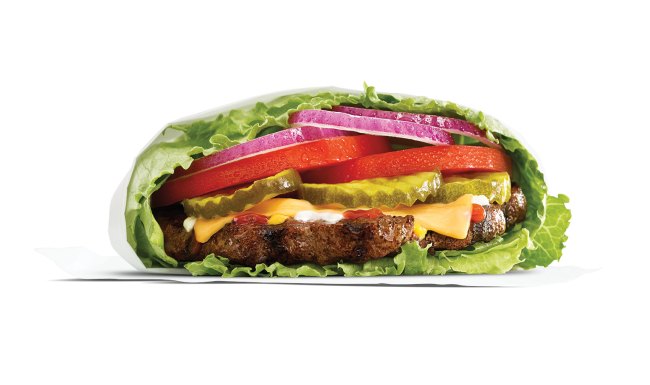 2021 will mark the 80th anniversary of Carl’s Jr. and if you’ve gone the past two decades without being properly introduced to this O.G., there’s no better time to get acquainted with this smorgasbord in burger form. The star of the show is a 1/3 lb. 100% Angus beef patty that’s given the charbroiled treatment over an open flame supported by an ensemble cast of American cheese, fresh tomato, red onion, pickle, mayo, ketchup, and mustard.

This absolute unit is usually bookended by a bun and could’ve easily spent the rest of its days coasting by on its stellar reputation alone. However, instead of resting on its laurels, it’s pulling a Keanu Reeves with an unexpected but crowd-pleasing second act by donning a lettuce wrap. 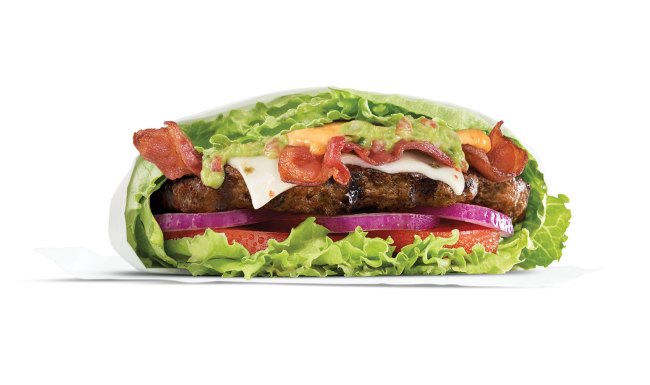 I’m not exactly sure when chefs around the culinary world initially entered an arms race in an attempt to see who could pile as many toppings as possible onto a burger but this traditionalist had a hard time getting on board with a lot of the unconventional offerings.

However, guacamole is not one of them. I’d be hard-pressed to name a more enjoyable way to incorporate some more veggies in your diet, and now that you’re able to throw lettuce into the mix, I can finally eat a burger when a traditional salad just won’t cut it.

I can’t think of a better way to pay tribute to the flame that gives the Carl’s Jr. burger its signature char flavor than giving it the spicy treatment, which features not one, not two, but three different elements to kick things up a notch (yes, that was a reference to the speech LeBron James gave after he signed with the Miami Heat. Levels, baby. Levels).

If the name didn’t tip you off, the burger is topped with jalapeño slices, but we’ve also got some Pepper Jack cheese subbing in for the American that graces the first two varieties in addition to the restaurant’s signature Santa Fe Sauce, all of which get to know each other inside (you guessed it) the lettuce they’re encased in.

For those who want more salads done the Carl’s Jr. way with charbroiled Angus beef and fresh veggies, any Carl’s Jr. burger can be made into a Lettuce Wrap by cutting the bun.

And that’s a wrap.