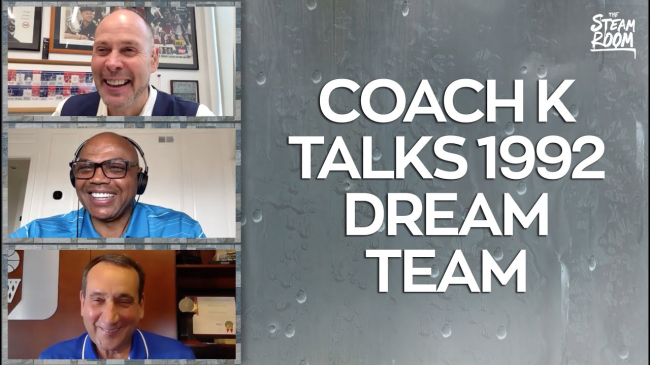 In the season finale of The Steam Room, Ernie Johnson and Charles Barkley were joined by Duke basketball coach Mike Krzyzewski. During the episode, Barkley and Coach K shared numerous stories about their time with the 1992 Dream Team including one tale about how Chuck was responsible for Krzyzewski’s daughter getting her hands on some beers while they were in the team hotel.

“I said all my miniatures are gone, the couple of beers, I thought she was going to get a couple of beers for her and her little girlfriends. I get back, my minibar is completely empty.”

It was at that point that Charles Barkley figured his goose was cooked.

“After practice coach says, ‘Uh, can I talk to you?’ I said, ‘Yes, sir, coach, I’m so sorry. She said she was only going to get a couple of beers’

Barkley, Ernie and Coach K also discussed Duke’s succession plan for after this next season when Krzyzewski retires, how much Charles dislikes college athletes getting paid, Charles’ experience playing against Coach K while he was in college at Auburn, what responsibilities Dream Team coach Chuck Daley gave Krzyzewski as an assistant, the mythical game where a groupd of college players “beat” the Dream Team in a scrimmage, and how little Michael Jordan actually slept.

“Hey, Ernie, it’s unbelievable,” says Charles. “He would play like 36 holes a day after practice and do the same thing every day. I’ve never seen a guy who never sleeps and play with that level.”