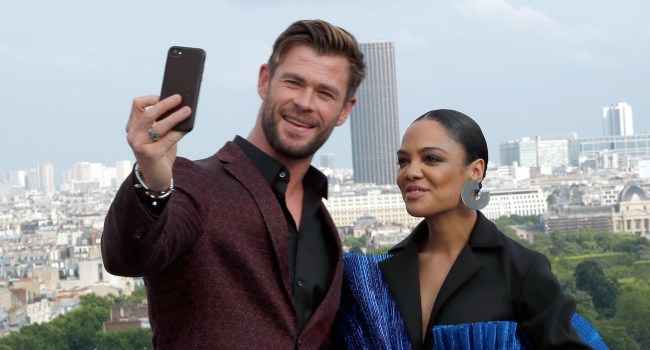 Before being cast as the Norse God of Thunder, Chris Hemsworth’s biggest claim to fame was appearing on 189 episodes of Australian soap opera Home and Away from 2004 to 2007.

In 2009, he was cast in Star Trek, as George Kirk: Captain Kirk’s father, who died aboard the USS Kelvin while battling the Romulans. He also made an appearance in A Perfect Getaway starring Timothy Olyphant and Milla Jovovich.

Then, in 2010, Hemsworth won the role of Sam Phelan in the movie Ca$h alongisde Sean Bean.

So, for three years there, choosing acting as his profession had not turned out to be such a terrific idea. Especially when it came time to for Hemsworth to pay the bills.

Hemsworth explained how bad the situation had gotten in a recent interview with Variety.

“A big reason I started acting was because I loved film and TV, but it was like we had no money,” says Hemsworth, who is the middle son. (His other brothers, Luke and Liam, are of course also actors.) He set a goal for himself to help his parents financially. “I wanted to pay off their house, initially. That was my sort of thing.”

It put a tremendous burden on him, which in retrospect made him too stiff in auditions. “I almost put too much pressure on myself,” Hemsworth says. “If I hadn’t taken it upon myself to take care of my family, I might have been more relaxed.” After leaving “Home and Away” in 2007, he struggled to land any major roles in Hollywood. “I remember I had an audition right before Christmas one year, where things were not going good,” he says. “I’d stopped getting callbacks, and I was getting worse feedback. I thought, ‘God, why did I do this?’”

Some of the near misses broke his heart. “I got very close to ‘GI Joe,’” he says of the action hero played by Channing Tatum in the 2009 summer hit. “I got very close to Gambit in the Wolverine ‘X-Men’ movies.” Instead, Taylor Kitsch was cast. “At the time I was upset,” Hemsworth says. “I was running out of money. But if I played either of those characters, I wouldn’t have been able to play Thor.”

Calling G.I. Joe: The Rise of Cobra a “summer hit” might be a stretch, but the paycheck probably would have been nice had he landed the Channing Tatum role. It did gross $302.5 million worldwide against a budget of $175 million, but would it have done as well with an unknown Hemsworth in the lead role?

Landing the role of Thor, while lucrative, didn’t do much to quell his worries about the future. He still was asking questions like, would he be recast in the role? Will there be a sequel? Will anyone come watch the movie?

Related: The Pile Of Money Robert Downey Jr. And Other Avengers Actors Are Making Is Mind-Boggling

Now, however, after changing things up with the character in Thor: Ragnarok and Endgame, Hemsworth is all in on continuing in the role.

“I’d still love to do more, to be honest,” he says. “And I don’t know what the plan is. I feel like we’ve opened up such a different character. I feel more energized for the possibility of where it could go.”

I am pretty sure I know where fans of Thor would to like see it go.