Chris Rock Is Writing A Movie That Will Star Him, Dave Chappelle, And Adam Sandler 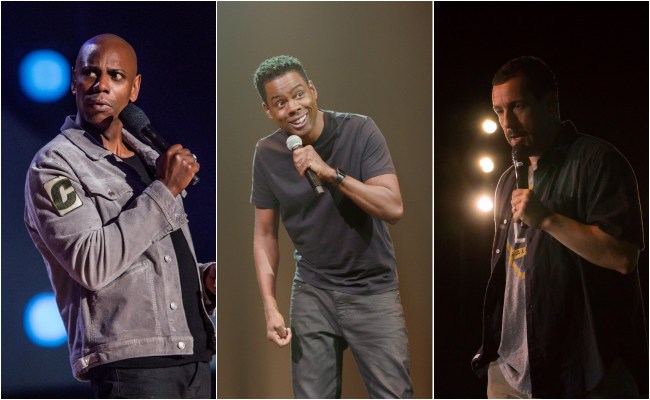 Chris Rock was set to have the most out-of-the-blue career revival before our world collapsed.

Now, this isn’t to say Chris Rock lost his star power over the last decade or so — he definitely hasn’t gone the way of Dane Cook — it’s more that the Chris Rock we’ll be getting this time around is a little more mature, a little more dramatic.

First, he’s set to star in the fourth season of Fargo, which is pound-for-pound one of the best shows on television. Rock himself has been nothing but glowing when it comes to the role, calling it the best of his career and comparing it to Tony Soprano. When it comes to projects I’m excited for in the coming months, Rock’s turn in Fargo ranks right near the top.

Then, even more mindblowing is the fact that Rock’s also starring alongside SAMUEL L. MOTHERFUCKIN’ JACKSON in the upcoming Saw reboot (yes, that Saw) called Spiral. And not only did the trailer for Spiral actually look pretty sick but its poster is giving off major indie drama energy. The vibes of Rock’s career are all over the place right now and I’m absolutely loving it. The best thing actors can do is be unpredictable.

Now, all that said, while I’m enjoying this experimentation phase of Rock’s career, I’d absolutely and gladly watch him pivot back into comedy, especially if that comedy is a movie he’s writing and will be pairing Rock’s generational talents with two other comedy greats from our generation, Dave Chappelle and Adam Sandler.

Chris Rock has written a new script that will pair him with his longtime pals Adam Sandler and Dave Chappelle, the Fargo star revealed in a recent interview with the Hollywood Reporter.

Plot details remain under wraps at this early stage in the game, but THR described Rock as “giddy” about the idea. While one would assume the project would be a comedy, judging by the reflective tone of the interview and where Rock currently is in life — doing seven hours of therapy each week — it wouldn’t surprise me if it turned out to be more of a dramedy. [via Collider]

For a 90s kid myself, it’s hard to find a more iconic comedic trio than Rock, Chappelle, and Sandler. Now, all we can do is hope that Jim Carrey and Will Ferrell make cameo appearances. Either way, I’m all in.