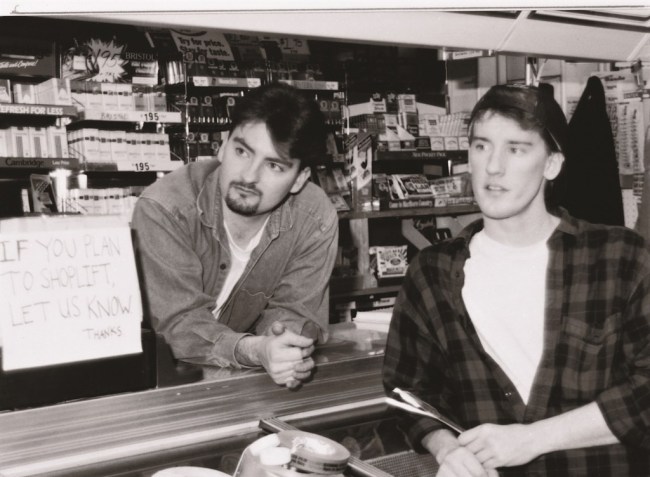 Dante was not even supposed to be there when Kevin Smith filmed the original Clerks movie. But now Dante and Randall will be back at the Quick Stop for Clerks 3 according to an exciting announcement by Kevin Smith.

Kevin Smith has been teasing Clerks III for years and even announced plans to make the threequel in 2012. Smith said he had a screenplay for the movie, but he had a difficult time getting Hollywood studios to fund the project. Then Clerks star Jeff Anderson, who played disgruntled video rental store employee Randall, dropped out of the movie.

This week, Smith and Anderson reconnected and the actor agreed to reprise his role as Randall Graves for Clerks 3. Smith posted a photo of the reunion on Facebook and Instagram, plus also included the announcement that Clerks 3 is really happening. Again. Smith also said that Clerks 3 would return to New Jersey, where he recorded the original movie in Leonardo, a town with a bunch of savages, that was released on October 19, 1994.

Smith made the announcement on Facebook and hinted the direction that Clerks 3 would go in:

3 CLERKS! Thanks to the good folks at @leeloomultiprops, I got to see Randal! #JeffAnderson, @jaymewes, and I spent Saturday signing stuff and catching up, seeing so much movie merch that’s been made over the last 25 years (hit the Leloo site for sweet signed skateboards)! But even better than that? We talked about making a movie together. It’ll be a movie that concludes a saga. It’ll be a movie about how you’re never too old to completely change your life. It’ll be a movie about how a decades-spanning friendship finally confronts the future. It’ll be a movie that brings us back to the beginning – a return to the cradle of civilization in the great state of #newjersey. It’ll be a movie that stars Jeff and @briancohalloran, with me and Jay in supporting roles. And it’ll be a movie called CLERKS III! To be great is to go on. To go on is to go far. To go far is to return. And we’re all gonna return to the scene of the crime! This won’t be the old script we almost made a few years back: this is a completely new screenplay that I just started writing last night! And so far, it’s like a dream come true! After mending fences with @benaffleck earlier this year, I was hoping for a chance to do the same with Jeff – so huge thanks to Leeloo Multiprops for getting us all in the same room. But the biggest thanks ever go to Jeff, for being receptive to the idea at all. This means I’m gonna get to play with my two favorite inaction figures again: Dante & Randal! Two weeks from the debut of @jayandsilentbob Reboot (on @fathomevents screens 10/15 & 10/17, link in my bio), I’m ecstatic to announce our imminent return to Quick Stop! So I assure you: we’re open! #KevinSmith #clerks3 #jaymewes #jayandsilentbob #danteandrandal #quickstop #leeloomultiprops #indiefilm #clerks

Smith has gotten the original cast of Clerks back for the third installment including Anderson, Brian O’Halloran as Dante Hicks, Jason Mewes as Jay, and Smith himself as Silent Bob. Smith revealed that he wrote an all-new screenplay for Clerks III, so it will be different than his 2012 version. Hopefully, they’ll get rid of the customers in the third movie to make the jobs great again.

The announcement comes only two weeks before his other big sequel, Jay and Silent Bob Reboot, is set to be released on October 15, 2019.

Smith sold his own valuable comic books and went into credit card debt to raise $27,575 to film Clerks. He even filmed the movie at the Quick Stop convenience store he worked at in real life to lower the costs. It paid off big-time as it was a smash hit, launching his directorial career, and enabling him to make more movies in his View Askewniverse such as Mallrats (1995), Chasing Amy (1997), Dogma (1999), Jay and Silent Bob Strike Back (2001), and Clerks II (2006).

Hopefully, the Clerks III shines a light on all of the innocent contractors who were hired to construct the Death Star that were unmercifully slaughtered by the Rebel Alliance.