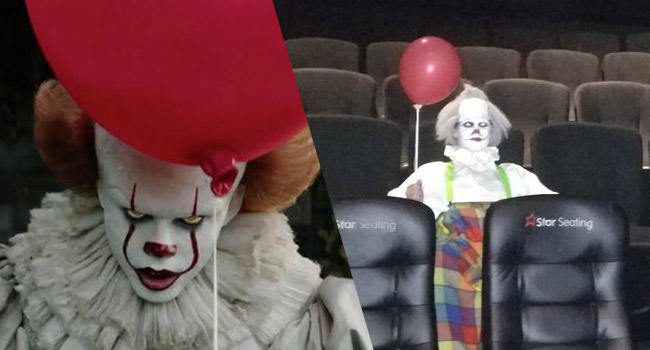 Dressing up as a clown these days, regardless of the situation, takes guts. Because I know that if I saw a random clown walking around out in public for no apparent reason I, and many others, would be ready to beat his clown ass at the slightest hint of any bad intentions.

However, dressing up as a clown and attending a screening of Stephen King’s IT? To do that you either have balls the size of grapefruits or you’re just nucking futs. Either way, showing up to an IT screening dressed as a clown is literally like asking people to hit you.

That hasn’t stopped a bunch of people from doing it though. And I am not talking about special screenings where the cinemas are asking people to dress up as clowns. I am talking about, like, being the only one in the theater dressed that way.

This is acceptable. They asked for it…

These, however, are most definitely NOT okay…

WE ARE IN THE CINEMA TO WATCH IT AND A FUCKING CLOWN JUST WALKED IN pic.twitter.com/c8XQLqZKYK

Sittin in the cinema waiting to see IT in 4DX and there's a fucking lassie sittin in the back wae a clown face, holdin a fckn red balloon

Hellllll nooo, I just went to see IT and halfway thru this clown walks in to the cinema with a red ballon and sits in the front row 😩🤡

This next guy even scrounged up the courage to talk to one of the clowns who was sitting there all by himself (with a red balloon, of course) in his theater…

Went to see IT, I'm first in the screen and this fucking guy's just sitting there. pic.twitter.com/b3oatLGdrs

Had a chat to him, he's actually alright

Just me and him for a good 10 mins or so

Turns out it was this guy…

gave jordan a makeover for the IT screenings tonight at work 🤡 did the best I could with the shitty costume pic.twitter.com/BBC600KvE6

I'm not that scary trust 😉

As we reported a couple of weeks ago, the clown community is not happy with IT and are expecting some major backlash over it. So people dressing up as clowns and attending the movie? Yeah, that’s definitely not going to help. Not that I care, because fuck clowns.

At least with the upcoming Gerald’s Game, another Stephen King movie adaptation that also looks scary AF, we can watch it in the privacy of our own homes, no clowns allowed.