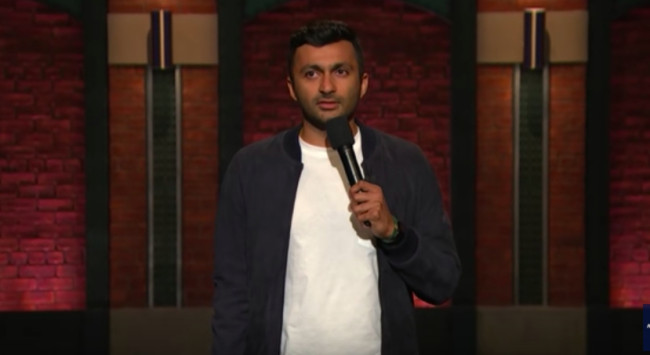 Two weeks ago, comedian and former Saturday Night Live writer Nimesh Patel made headlines worldwide after he had his mic cut 20 minutes into a set at Columbia University for jokes that Columbia’s Asian American Alliance (AAA) deemed homophobic, racist, and unsafe.

The AAA invited the 32-year-old to perform during the group’s annual charity event, “CultureShock: Reclaim,” but rescinded that invitation while Patel had a mic in his hand in front of several hundred students, with three student organizers coming onstage to politely tell him they were going in a different direction with the next 30 minutes of his set.

In a New York Times OpEd piece after the incident, Patel detailed the joke that broke the snowflakes backs.

I open by saying I live in Hell’s Kitchen, a diverse area in New York populated by, among others, gay black men who are not shy about telling me they don’t approve of what I’m wearing. I try to learn things from everyone I encounter, and one day I realize oh, this is how you know being gay can’t be a choice — no one would choose to be gay if they’re already black. No one is doubling down on hardship.Then I say, no black dude wakes up and thinks that being a black man in America is too easy. No black dude says, “I’m going to put on a Madonna halter top and some Jordans and make an Indian dude real uncomfortable.” That’s not a choice.

Patel goes on to say that the joke bombed, while saying that that same joke has worked at “New York clubs full of gay people, black people and college students multiple times.”

A silver lining in this shitstorm of a story is that Patel did say that after his set, he was flooded with messages of support from students apologizing via email and via Instagram DM, reassuring him that not everyone on college campuses is as frail as paper mache.

The comedian also had a poignant point about the irony of trying to silence someone you disagree with.

When you silence someone you don’t agree with or find offensive, not only do you implement the tactic used by the people you disdain; you also do yourself the disservice of missing out on a potentially meaningful conversation. You cannot affect change if you are not challenged.

Patel appeared on the Joe Rogan Podcast to expand on his experience. Rogan, who stopped performing at colleges when he got rich enough to do so, can hardly contain his disgust at how the comedian was treated.