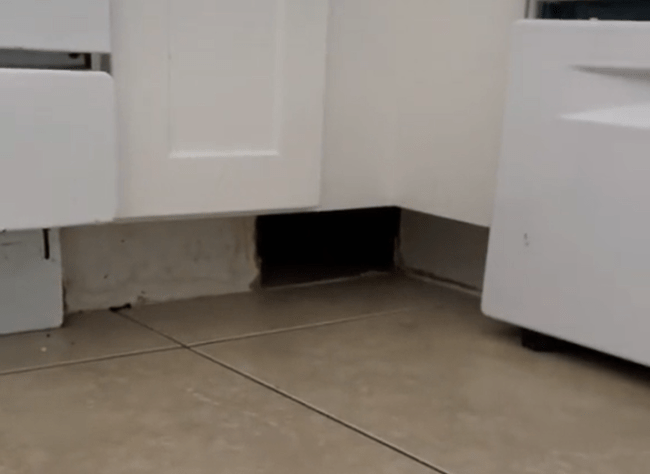 A woman accidentally discovered creepy hand-drawn symbols hidden in her kitchen, which prompted online commentators to urge her to “move out” immediately. The viral TikTok video of the potentially haunted house has people speculating what the symbols mean – from innocent to a dark meaning.

A TikTok user by the captivating name of “@anxiousweenie69” posted a video revealing a creepy aspect to her home that she discovered. The woman who posted the video recently got a new kitten with her boyfriend at their home. When the couple went looking for their kitten they discovered a much more concerning revelation.

“So, me and my boyfriend got a new kitty recently and she was hiding,” she said. “We were trying to find out where she was. We tried looking behind the couch and we couldn’t find her anywhere. Then we look in the kitchen and we see that there’s a hole here.”

“Let me just show you what we found. I’ve put my wide-angle lens on so you can see it better,” the TikTok user noted. “This hole is really tiny compared to my hand, but when you go in here, there’s a picture. I don’t know what the hell that means.”

There was a bizarre and curious hole under the kitchen cabinets. Inside the dark and mysterious hole was a weird picture of hand-drawn symbols.

The TikTok user named Angelica asked, “Help what does this mean? Is my apartment cursed?”

@anxiousweenie69help what does this mean?? is my apartment cursed ##creepy ##ghost ##aliens ##confused

The creepy picture that was behind the oven actually covered up another hole, which made the spooky situation even spookier.

The couple just want to know what the symbol means. Many commenters say that it looks like a drawing by a child, while others point out it looks like a White Walker symbol from Game of Thrones. Then there are many TikTok commenters recommending that the couple “move out” now because their house is haunted.