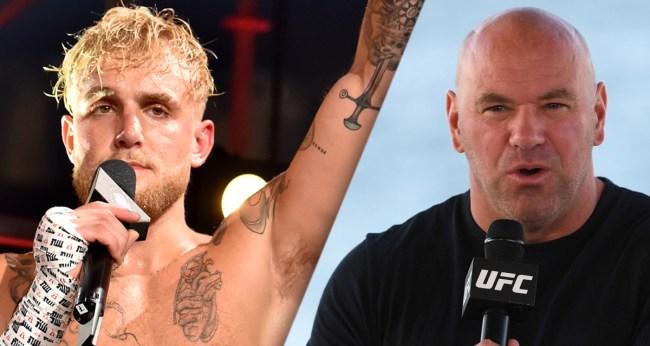 Following his latest knockout against someone who has never boxed professionally, Jake Paul somehow thinks that entitles him to a boxing match against another well-known fighter, and someone with one whole professional fight to his name, Conor McGregor.

“The McGregor fight just became more realistic, like I’ve been saying. I just want to do big fights,” Paul said following his latest victory, while admitting, “Ben Askren was a step up.”

Askren, like Nate Robinson and Ali Eson Gib, came into his fight with Paul sporting a record of 0-0 in professional boxing. Askren was at least once a pro mixed martial artist, retiring in 2019 with a 19-2 pro record (losing his last two fights – both in the UFC).

All of this chirping by Paul has naturally caught the attention of UFC president Dana White, and not in a good way.

During an interview this week with Kevin Iole of Yahoo Sports to discuss the upcoming UFC 261 event, Iole brought up Paul saying he wanted to fight former UFC light heavyweight and heavyweight champion Cormer, White was caught completely off guard.

Then when Iole informed White that Cormier told Paul to go fight Tyron Woodley, White responded, “Why don’t you go fight a f–king boxer?! What the f–k do these guys keep talking to UFC guys for?!

“I’m gonna have to slap them with another f–king legal letter, these f–king idiots. Go talk to f–king boxers. What are you doing?”

White was then asked what his take was on Askren getting knocked out by Paul in the first round of their fight.

“I don’t even want to say what I think happened in that fight,” White replied.