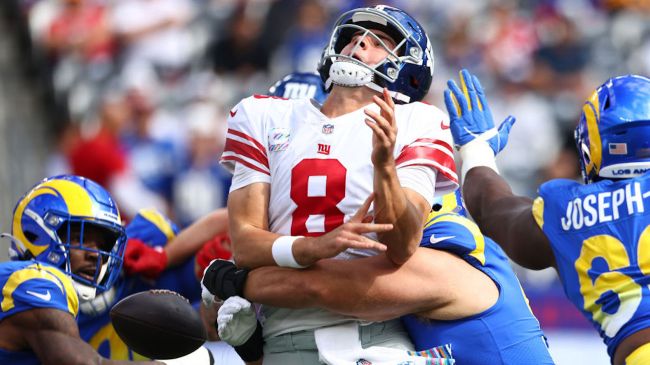 As a New York Jets fan — undoubtedly one of the worst franchises in major American sports — I’m well aware that I’m not in a position to make fun of other teams, especially when it comes to quarterback play. The best QBs the Jets have ever had during my lifetime are Vinny Testaverde, Chad Pennington, and about 10 weeks of Brett Favre before he literally blew out his bicep.

The Giants, though, have certainly given the Jets a run for their money in recent years: from 2017 until, now, the New York Giants and the New York Jets are tied for the worst record in the National Football League with a record of 22-59. Just some purely putrid football being played in the Big Apple in recent seasons.

One of the main reasons that the Jets and Giants — and all NFL teams, to be honest — have struggled to compete in recent years due to their inability to find a franchise quarterback, which is a title that certainly cannot be bestowed on Giants signal-caller Daniel Jones, as the G-Men Ghave yet to exercise the quarterback’s fifth-year option.

During a recent interview, Jones addressed the quality of play he’s put forth thus far in his career and took “full responsibility for how he’s played (which is bad).

“For me, my focus is on preparing myself,” Jones told NJ.com. “I take full responsibility for how I’ve played. We haven’t won enough games, we haven’t scored enough points, we haven’t done things well enough. So I take responsibility for that, as a quarterback you play a big role in those things. That’s what I’m focused on and making sure that myself, as well as the offense and the team, is ready to go.”

During his three-year NFL career, the 24-year-old former first-round pick has started in 37 games and has completed 62.8% of his passes for 8,398 yards, 45 touchdowns, and 29 interceptions. Jones has also rushed for 1,000 yards and five touchdowns. In those 37 starts, though, Jones has a total of 49 turnovers, as he’s also lost another 20 fumbles.

Regardless of whether or not the Giants take a QB in this year’s draft, 2022 will likely be Jones’ last season in NY unless he makes a drastic turnaround, particularly when it comes to game-changing turnovers.