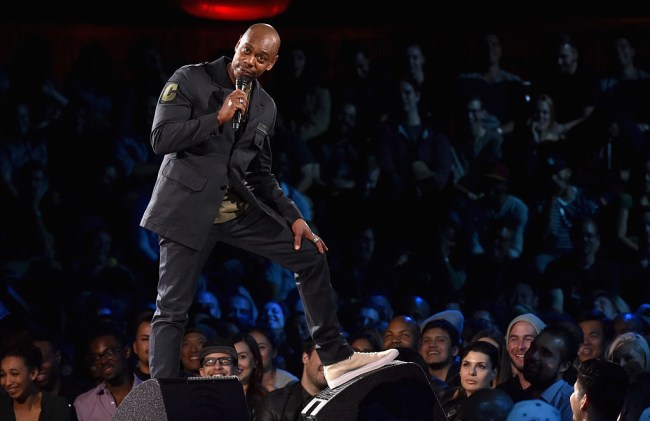 There are a handful of stand-up specials that transcend comedy and their comedic genius seeps into mainstream culture. Whether it be any of the comedy specials by Richard Pryor and George Carlin, Bill Cosby’s Himself, Eddie Murphy’s Delirious, Bill Hicks’ Relentless, Mitch Hedberg’s Comedy Central special, Louis C.K.’s Shameless, Chris Rock’s Bring the Pain, and Kevin Hart’s Let Me Explain. You can add Dave Chappelle’s latest comedy special, Sticks & Stones, to the prestigious list.

Dave Chappelle released his fifth comedy special for Netflix on Monday and it has already been decried a lightning rod for controversy and condemnation as well as praise and applause. There has already been backlash and outrage in reviews of Dave’s latest comedy special. Plus there is a chorus of people online who are unhappy with Chappelle’s jokes that they deem to be offensive.

Chappelle set the tone for the entire special by having Kendrick Lamar’s DNA play before the stand-up comedy began with the lyrics: “You mothaf*ckas can’t tell me nothin’, I’d rather die than to listen to you.” In Sticks & Stones, Chappelle doubles down on that attitude.

Chappelle kicks off his comedy special with two impressions, something the great stand-up rarely does. “Tonight I’m gonna try some impressions out,” Chappelle informs the crowd in Atlanta, where he filmed the special a year ago.

“Hurry up and finish that Constitution, n—–. I’m trying to get some sleep,” Chappelle says in his white person voice he made so famous in The Chappelle Show and says that he is impersonating the Founding Fathers.

“The next one’s a little harder,” he warns the crowd about his next imitation. “I want to see if you can guess who it is I’m doing an impression of,” Chappelle says in a Goofy-like voice. “Uh, duh. Hey! Durr! If you do anything wrong in your life—duh!—and I find out about it, I’m gonna try to take everything away from you!”

“And I don’t care what I find out! Could be today, tomorrow, 15, 20 years from now. If I find out, you’re f*cking—duh!—finished,” Chappelle ends his impersonation. Several people in the crowd guess that Chappelle is impersonating President Donald Trump. Dave then drops the plot twist on the crowd and yells, “That’s you! That’s what the audience sounds like to me.”

“That’s why I don’t be coming out doing comedy all of the time ’cause y’all n—– is the worst mothaf*ckas I’ve ever tried to entertain in my f*cking life,” Dave reprimands as he tongue-lashes the crowd.

Just as Dave predicted in the special, people have come after him. There have already been several articles written claiming that Chappelle is misogynistic, transphobic and victim-shaming of Michael Jackson’s victims. He calls the LGBTQ community the “alphabet people.” There was Chappelle’s “problematic” defense of fellow comics Louis C.K. and Kevin Hart. He also poked fun of the #MeToo movement. These are sacred cows that you are not allowed to talk about if you are a public figure. Dave Chappelle doesn’t care and will write jokes about whomever and whatever Dave Chappelle wants to write jokes about, which is bold in today’s environment of cancel culture.

I hate to break it to you, but Dave Chappelle has always been gleefully offensive, purposefully outlandish and magnificently lambasting celebrities, politicians for years so that he could entertain people in the name of comedy.

But Chappelle is an equal-opportunity offender and also targeted white people on opioids, blacks, Asians and R. Kelly. Chappelle even lampoons Jussie Smollett and his reported fake hate hoax, by mispronouncing his name with a French accent.

I’m not saying that Sticks & Stones is the funniest comedy special of all-time, it’s not even Chappelle’s funniest comedy special, that honor definitely goes to Killin’ Them Softly. But it is an important comedy special that has much more consequential ramifications than just telling jokes on stage. This is the era of cancel culture, political correctness, hyper-oversensitivity, internet mobs and prudes who tell you what is or isn’t funny. Chappelle’s new special is a breath of fresh air, despite coming off a little messy at times.

We live in a clown world where there is a new wave of comedians who “don’t want to be funny.” Yet another reason why we as a culture need this Dave Chappelle special more than ever.

In the past, comedians were counter-culture truth dispensers who challenged authorities and norms, but did so in a hilarious way and from an angle that most never saw coming. Shocking, but not relying on shock.

Shocking just to be shocking isn’t funny. In fact, it’s difficult to shock anyone when you have the internet and can watch eye-opening videos with the click of a button. The internet killed the radio shock jocks of the late 1990s and early 2000s because just being shocking was no longer shocking. Simply being shocking isn’t enough, you need to be funny.

Dave Chappelle’s latest special is shocking because people, especially public figures, suffer extreme consequences if they say or write something that is deemed wrong by the puritans who are offended by everything.

With everything to lose and very little to gain, Chappelle bravely rallies against the grain of political correctness and smashes cancel culture with zero regards of the known consequences. Dave Chappelle is a massive star, yet saying one wrong idea can get a celebrity of any magnitude canceled.

The outrage mob will grab their pitchforks and organize to make it appear that people are angry over words. But in reality, which is definitely not Twitter or the comment section of YouTube, the boisterous bunch demanding someone be fired or shunned isn’t very large, they don’t hold any real power and by all likelyhood, they aren’t consuming whatever project or product they claim to be boycotting.

And just like the outrage mob on the internet, most writers who say they are offended by Chappelle’s jokes are either afraid of the outrage mob monster that they helped create or they are putting on a facade so that they can say that they have the moral high ground to attack people in the future. It’s a vicious cycle and it doesn’t seem to be ending any time soon, but maybe Dave Chappelle can restore some lost sanity in this world of cancel culture. And remember this lifehack: If you’re easily triggered or can’t handle certain words or jokes, you’re allowed to turn off the special or simply never watch it. So simple!

Don’t forget to watch the extra 23 minutes of material of Dave answering questions from the audience that plays after you watch all of the credits for Sticks and Stones.

RELATED: Jerry Seinfeld Talks About How ‘Comedians In Cars Getting Coffee’ Has Evolved And His Favorite Guest