David Blaine is currently flying 3.5 miles above the earth holding a bunch of balloons like the old man from Pixar’s UP. The stunt is streaming live on YouTube as we speak, just hit play on that video above and you can see the action.

The ‘Ascension’ stunt brings David Blaine 18,000 feet high. He said his daughter was the inspiration for this as she would take cold showers when she was a little kid and these days dives into icy water. Somehow that led him down the line of thought that he should ride 52 helium-filled balloons several miles above earth and parachute back. Not weird at all, nope.

The 52 helium balloons are attached to his wrists and shoulders and he’s set to rise at a rate of 100-feet-per-minute. Sounds like a pretty normal Wednesday for David Blaine, doesn’t it?

Tethered to them with a lightweight harness running from his wrists to his shoulders, he will rise to thin air — first at 100 feet per minute, then, as oxygen becomes sparse, accelerating at five times that speed — before releasing the balloons and parachuting back to earth. It’s a stunt that has been a decade in the making and required Blaine to complete 500 airplane jumps, get licensed for hot-air balloon piloting and learn to read wind patterns. The undertaking is ground-breaking enough to have been deemed a research and development project by the FAA. (via NYPost)

It is a little odd that he chose a Wednesday morning to pull off this stunt, a random weekday ahead of the Labor Day Weekend.

The good news is that even if you miss this stunt live you can watch the full recap on YouTube as it will live there indefinitely on David Blaine’s channel. 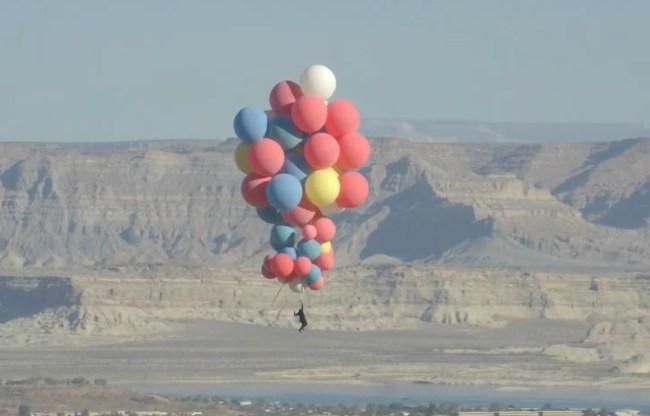 This man is infinitely cooler than the ‘Flying Wallendas’. Why would I ever want to see a person walk across a tightrope when I could watch a better performer fly into space using some helium ballons???