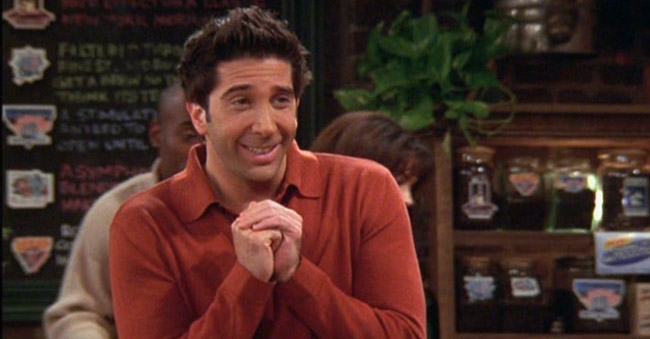 For those of you just getting up to speed here, a beer thief who looks just like Schwimmer went viral after a photo of him was posted to Facebook by Blackpool police.

After posting the photo, the Blackpool police department received so many responses about Ross from Friends that they even issued a response, saying, “Thank you to everyone for your speedy responses. We have investigated this matter thoroughly and have confirmed that David Schwimmer was in America on this date. We’re so sorry it has to be this way.”

Of course, because, internet, this led to many, many jokes.

And while that tweet above was my personal favorite, it turns out that the best tweet of all about Schwimmer’s thieving doppelganger ended up coming from Schwimmer himself.

Officers, I swear it wasn't me.
As you can see, I was in New York.
To the hardworking Blackpool Police, good luck with the investigation.#itwasntme pic.twitter.com/EDFF9dZoYR

You know what? I have never been a real big David Schwimmer fan. He was probably my least favorite Friend, just behind Courteney Cox (don’t @ me). But now, after seeing how clever the man can actually be when he wants to be, I actually kind of like the guy now. Plus, did you know he had a recurring role on The Wonder Years back in the day?

Naturally, Schwimmer’s tweet led to even more jokes, because, internet.

It all started with a few mini shampoo from a hotel.

Related…
• Kelly Kapowski Almost Played Rachel Green On ‘Friends’ Instead Of Jennifer Aniston
• Matt LeBlanc Explains Why A ‘Friends’ Reunion, Despite Fan Interest, Will Probably Never Happen
• Netflix Users Who Are Just Watching ‘Friends’ For The First Time Are Making Some A+ Observations