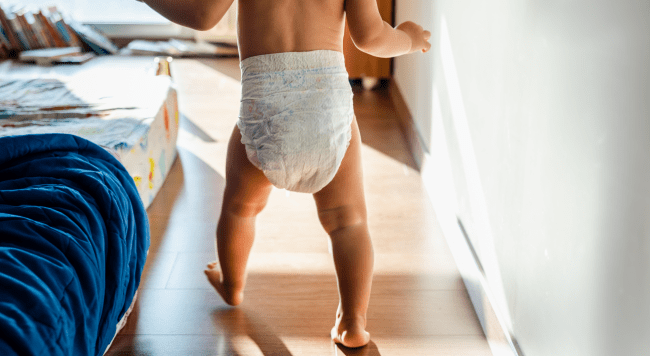 Australian day care center chain Only About Children says parents should ask for their baby’s permission before changing their diapers. Seriously. This is something they suggested.

Only About Children, which runs more than 75 childcare centers across Sydney, Melbourne and Brisbane, says parents should be asking themselves, “If you were a baby, how would you like to have your diaper changed?” (FYI: They call diapers nappies down there.)

“The most significant thing about a nappy change is not the new nappy,” 7 News reports the center suggests. “It’s the good feelings shared between baby and parent. It’s the relationship.”

“When toddlers become mobile, nappy changing may look quite different!” the advice says.

“Continue to ask for cooperation but understand that your toddler may wish to now stand for their nappy change.

“Also encourage their independence, you may ask him to take off his own nappy or wipe himself.

“Wait for a gap in their playing before starting the nappy changing process.

“You may wish to give your toddler some autonomy and ask ‘Would you like to walk to the change table or should I carry you?’”

They also suggest giving your baby your undivided attention and slow down when changing their diaper.

“Toddlers sense our hurry or distraction, and it can make them tense and resistant,” they advice.

Here’s the absolutely best part of Only About Children’s advice: don’t interrupt your baby when they’re playing to change their diaper.

As one might imagine, a lot of parents on social media reacted to this advice of asking for their baby’s permission before changing their diapers with a mix of laughter, outrage and disbelief.

“What a joke. The world’s gone mad and to think some mothers/parents will believe this crap,” said one person on social media.

“Can I ask my toddler to cook dinner for us. Vacuum the house and do some washing. Then they can put themselves to bed,” wrote another.

And on it went.

Oh dear. Parents encouraged to ask a toddler if they can change it's nappy, at Only About Children Childcare Centres in Oz. 🙄
It's all about respect they say.
And if they say no?
Leave them in it and tell them to do it themselves.
That will teach them. 😁

An Australian Childcare chain ‘Only About Children’ suggests parents should ask for permission before changing nappies to ensure “respectful” changes. “It’s the good feelings shared between baby and parent. It’s the relationship.” Yep, when your baby has diarrhoea go ahead & ask

Do they get a participation ribbon after? #FFS

The loons have escaped from asylum. This takes the cake for political correctness.

Just when you think society couldn't get any dumber, up step this mob....