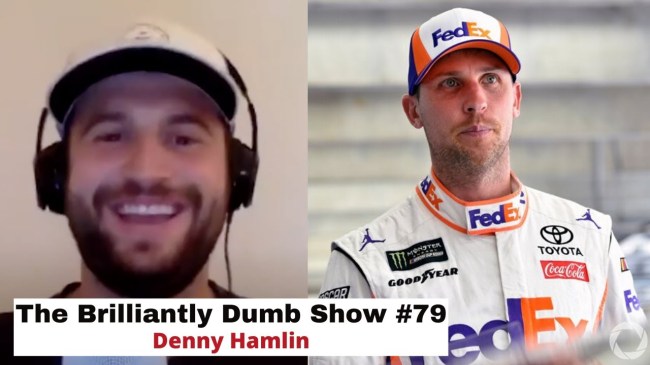 Denny Hamlin has emerged as one of NASCAR’s biggest superstars. His high energy and bright personality has helped catapult his way into stardom in the sport and is widely recognized by fans across the country. His contribution to the sport just so happened to be recognized by the greatest athlete of all time, Michael Jordan. Jordan’s love for NASCAR is what resulted in a strong friendship between both him and Hamlin. And we all know just about any friendship with Jordan leads to a day with him on the golf course.

Hamlin once showed up to the course with six other people that were expected to tee off with the legend himself and somehow the round only took three hours.

I asked Hamlin about the three-hour speed round he played with Jordan in order to get a full 36 holes of golf in that day.

“A: you have to have fast golf carts, and B hit when ready, there is not honors or anything like that. When you come up to the tee, you put your ball down and you hit it,” Hamlin explained. “There is no messing around in his group. And to play an eight-some in three hours is pretty amazing. But they do play 36 holes every day.”

I had kind of a bizarre follow-up question that anyone who watched the interview with Hamlin might have wondered. “Are you worried about any type of golf etiquette when playing with Michael Jordan such as walking into his line or anything like that?”

Hamlin laughed and responded, “Not really, I mean you have to be pretty conscious of what’s going on around the green but I am telling you its pretty much a free for all for the most part. It’s best if you bring cash with you when playing with him for sure.”