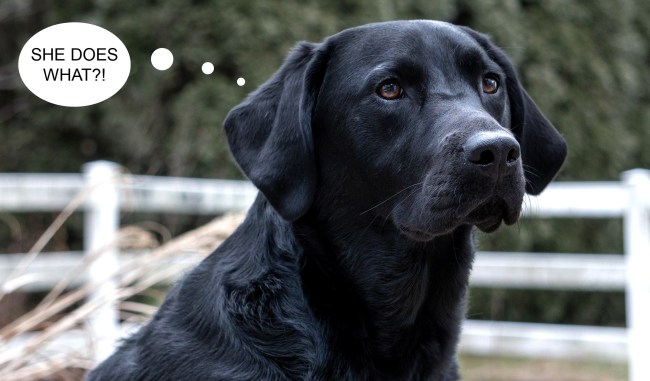 That’s right. A very good dog named Eclipse has her bus pass attached to her collar and every day she rides the bus to and from her local dog park so she can play for a couple of hours, and she does it all by herself.

The black Labrador and Mastiff mix lives in Seattle with her pet human Jeff for whom she has no patience.

We know this because one day as Eclipse and Jeff were heading to the bus stop for a trip to the dog park, the bus arrived, but Jeff was taking too long to get on board so Eclipse said to hell with it and climbed on, took a seat, and went off to the park without him.

In a post on Facebook, which has rightfully gone viral, Robbie Lauren explains exactly how Eclipse became so independent.

“This is Eclipse. Every day she leaves her house, by herself, and takes the bus downtown to the dog park where she spends a couple of hours getting exercise and making friends, and then she takes the bus back home again. She even has her own bus pass attached to the collar,” writes Lauren.

“It started when her owner, Jeff Young, was taking too long when the bus arrived, so she impatiently ran ahead and got on the bus by herself. The bus driver recognized her and dropped her off at the dog park, and later Jeff caught up with her. After several more trips by herself, Jeff started letting her go on her own, and she always comes back home a couple of hours later.

“All of the bus drivers know her and she makes them smile, and many of the regular passengers enjoy seeing her every day and will often sit down next to her. Even the police have given their approval as long as the bus drivers are okay with the arrangement. ‘She makes everybody happy.'”

Eclipse even has her own Facebook page, because she’s a fierce, outgoing woman dog and needs to keep in touch with her friends and fans.

And there you have reason number 8,347 that dogs are better than cats. (But don’t f**k with them.)