Don Cheadle Reveals One Of The Best Lines In ‘Avengers: Endgame’ Was Improvised 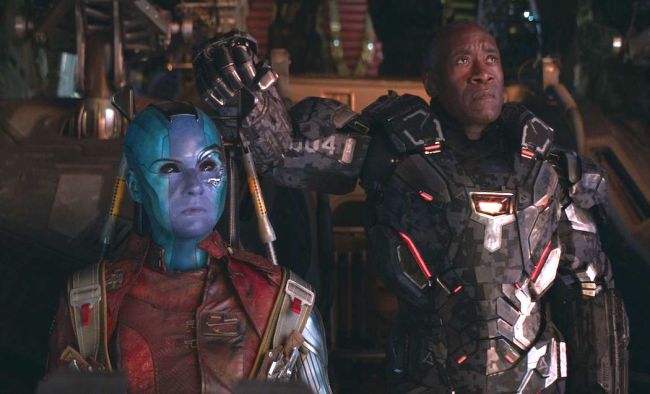 If you were watching the Super Bowl on Sunday, then you perhaps noticed a commercial for Michelob ULTRA Seltzer starring the one and only Don Cheadle. And because of that Super Bowl ad, I’ve spent the morning drinking Michelob ULTRA Seltzers and I am absolutely HAMMERED right now and it’s not even 10 a.m. . No, I’m kidding, I’m actually still deathly hungover.

The reason I mention Cheadle’s Big Game ad is that it provided us the opportunity to speak with the Academy Award-nominated actor, discussing everything from Boogie Nights to shooting Rush Hour 2 with Jackie Chan to filming Ocean’s 12 in Amsterdam to starring in the Marvel Cinematic Universe.

During our conversation, while Cheadle exclusively revealed to us the next time we’ll see War Machine (in The Falcon and the Winter Soldier), I wanted to touch on the last time we saw Rhodey, which was when he was traversing the galaxy with Nebula in Avengers: Endgame.

As I pointed out to Cheadle, despite the fact that Endgame is, quite possibly, as sprawling and grand as a movie can be, his James Rhodes is able to imbue the film with some real humanity during a quick exchange with Nebula, as they each express some remorse over the way that they are.

As it turns out, that subtle, touching moment between the two of them was actually created by Cheadle himself, who revealed that he improvised the line during rehearsals and it eventually made it into the film:

One of the most subtle, human moments in Endgame came in a touching exchange between War Machine and Nebula.

Turns out that line was improvised.

Our full interview with Mr. Cheadle, on the latest @PostCredPod 🍿

It just goes to show that even in a franchise as formulaic as the Marvel Cinematic Universe, the actors involved are still given plenty of creative freedom to bring something extra to the production.

You can check out our full interview with Mr. Cheadle over on the Post-Credit Podcast, where we’re also recapping and reviewing every new episode of WandaVision, so make sure to check that out (Cheadle interview starts at 1:29:00).