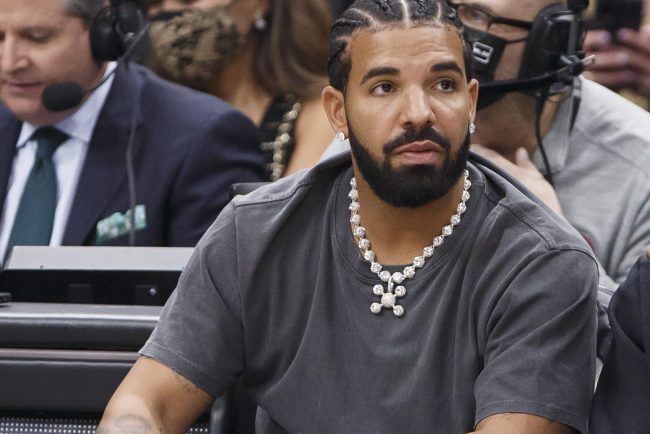 The chain is connected by several diamond orbs and features an abstract pendant. As you can see in the images, you simply can’t miss noticing it.

How Drake Acquired the Diamond Chain

Wild enough, the necklace was available to purchase online via Frank Ocean’s luxury jewelry company called Homer. If you look at the listing of the necklace now the site mentions it’s sold out.

The necklace is called “Sphere Legs High Jewelry Necklace” and has a listing price of $1,898,000.

According to the product description, the necklace is joined by pavé links, with each orb boasting a “0.33-inch brilliant-cut white diamond with an average weight of 2.326 carats.”

Here is the rest of what Homer says about the necklace,

Homer: “All stones are graded in the F-G color ranges with VVS clarity. The magnificent focal point of the piece is a dazzling floating pendant whose four branches each feature a matching 0.33-inch brilliant diamond in a sleek bezel setting. A final brilliant-cut stone marks the true center of the pendant, giving the Sphere Legs High Jewelry Necklace a total weight of 127.5 carats.”

While Drake likely paid the full $1.9 million price tag, it looks like he got a deal on shipping. Homer notes the necklace comes with “Free express shipping.”

Other Stories of Drake Blowing Tons of Money

Drake’s reported net worth is somewhere around $180 million right now, so it’s safe to say that Homer necklace doesn’t make much of a dent in his wallet.

Aside from his normal media coverage, it feels like Drake is constantly wagering or flexing exorbitant amounts of money. Recently, he lost about $100,000 when he wagered Duke would beat North Carolina in the Final Four.

Drake also lost $250,000 living betting on Jorge Masvidal to beat Colby Covington at UFC #272 at the beginning of March.

JUST IN: Drake has bet $275,000 in #Bitcoin on Jorge Masvidal to win tonight’s #UFC272 main event against Colby Covington.

And who can forget Drake’s recent spending spree on expensive basketball cards? In one IG story he posted $300,000 worth of Panini Flawless Basketball cards. Each box is worth up to $20,000.

He also opened a bunch of rare boxes of basketball cards with Goldin Auctions founder Ken Goldin. Drake likely made the money back on the cards thanks to him pulling a couple of pristine Michael Jordan rookie cards.

Drake pulled a Michael Jordan basketball card worth up to $1M‼️💰

I’ll end on a high note here of Drake spending tons of money. He also recently pledged $1 million in Bitcoin to LeBron James’ I PROMISE School.

Love to see it. 🙌 pic.twitter.com/yC7cnUUITW