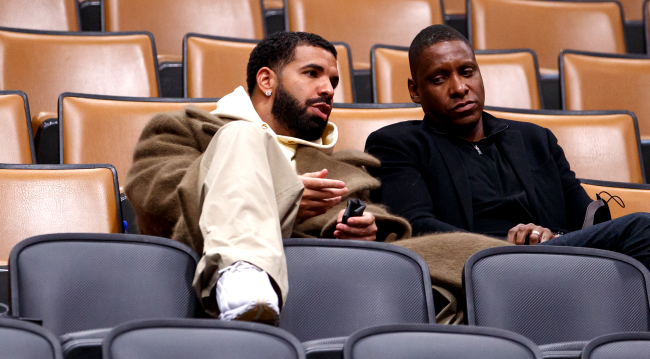 The internet certainly loves them some Drake memes, don’t they? And why not? Dude is just so memeable.

Heck, just a few nights ago Drake went viral with a meme about his reaction to finding out Rihanna is pregnant.

Drake this morning when he seen why Rihanna is trending pic.twitter.com/o6Ip1q0spL

And who will ever forget the time a Drake meme made Shaq walk off the set and break a bunch of stuff in the janitor’s closet?

At least Drake is cool with being the subject of our memes, or was at some point.

“I have become the most memed person aside from the Michael Jordan crying face,” Drake said in 2016. “I love that I’m the guy that doesn’t take himself too seriously. I like laughing even if it’s at my expense. It doesn’t feel like it’s necessarily malicious or hurtful stuff.

With all of that in mind, it isn’t a huge surprise that some footage of Drake at Tuesday night’s Toronto Raptors and Miami Heat game checking out his phone got, you guessed it, turned into a funny new meme.

Naturally, because “it’s Drake” the internet immediately turned him into another stellar new meme.

The latest Drake meme has the internet in stitches

Many fans were quick to wonder just what it was that had Drake staring at his phone with such deep focus.

He just got the baby registry email. https://t.co/IeuQA2eVgQ

Perhaps it was a message from one of his lady friends.

when she hit you with the "this you?" message filled with screenshots pic.twitter.com/8M4y0fKUWl

when she sends you a paragraph sayin she done with you while you out with the bros pic.twitter.com/RlEsDzTPjR

Some thought he was just surprised at the Washington Football Team’s new name.

Many took Drake’s look of deep contemplation to mean his next album is going to be a real banger.

next album gonna be insane https://t.co/uxexcVnmaY

Some others thought it was more meta.

And hey, at least the internet isn’t talking about the Drake Curse anymore? Bright side, Drizzy!