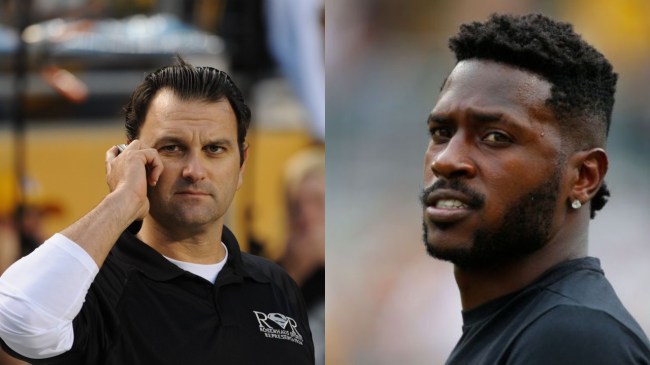 According to a lawsuit filed Tuesday in the Southern District of Florida by his former trainer Britney Taylor, Brown allegedly sexually assaulted the former Central Michigan University student three separate times between 2017 and 2018.

Appearing on the Noon edition of SportsCenter, Rosenhaus — who has negotiated over $2 billion of NFL contracts during his career –addressed the allegations against his client, which he characterized as “absolutely not true” and a “money grab.”

Additionally, Rosenhaus said he “wouldn’t be doing this interview” if he did not believe his client.

The lawsuit states that the first alleged incident occurred in June 2017 when Brown, then with the Pittsburgh Steelers, allegedly “exposed himself and forcibly kissed her [Taylor] without permission.”

Taylor then says the second alleged incident occurred “weeks” later, when Brown allegedly snuck up behind Taylor “as she was watching a church service on her iPad at his home” and “masturbated and ejaculated on her back.”

The suit also claims that a third instance of sexual assault allegedly happened on May 20, 2018, when Brown allegedly “forced her face into a mattress and raped her,” the suit states.

Additionally, Brown allegedly also sent the following messages to Taylor after one of the alleged incidents:

At this time, the NFL is reportedly investigating Brown. It is unclear if he will suit up for the New England Patriots this weekend when they head to Miami to take on the Dolphins, although he could be put on the NFL’s commissioner exempt list while the NFL conducts their own investigation into the allegations made against the troubled wideout.