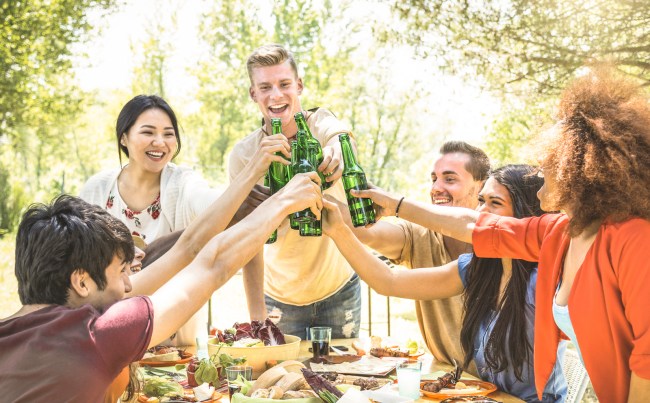 New research explains that drinking heavily during backyard cookouts has more to do with our brains and less to do with being social.

Getting shit-faced drunk with friends and neighbors during those all-important backyard fiestas is a tradition that goes back to the post-World War II generation.

It was a nervous time when Americans, presumably still frightened by the idea that sickos like Hitler could still be out there looking for world domination, hit the road to see more of the United States just in case the big bomb came crashing down and killed them all.

However, these people eventually made their way back home and, rather than slip back into a mundane way of life, they attempted to recreate the devil-may-care lifestyle that they enjoyed while hanging out in hot spots like California, Florida and Hawaii.

They iced down coolers, grilled a variety of meats and brought the Tiki-bar social scene to suburbia. It was nothing for those bastards to get so turned up at some point in the evening that it was almost guaranteed that one of them was going end up humping the paint off the plastic pink flamingos and pass out in the weeds.

That’s just the thing, these jet setters from the world of travel and leisure eventually noticed that they drank with a fuck-ton more gusto during those lawn jockey soirees than when they were just enjoying a cold one and trying to forget that a nuclear war machine might drop from the heavens and turn them into shit stains and dust.

Science just wasn’t as advanced back then, so they were never able to establish any correlation between flipping a few burgers under clear, blue skies and the vomit-tongued regret that they were forced to contend with the next day.

All they knew is their Aloha shirts reeked of beer sweats and piss, and their wives weren’t speaking to them anymore.

Fast forward to present day and not much has changed. Sure, the kids today are out there doing keg stands and sucking tequila shots off each other’s pierced extremities instead of molesting the lawn ornaments, but the foundation of these garden mixers is mostly the same.

We assemble on somebody’s freshly cut lawn and then punish all of the alcoholic beverages in sight with ten times more enthusiasm than we would under normal circumstances.

Just try to find someone this year who isn’t suffering from a vicious hangover after the Fourth of July holiday and we’ll show you someone who just sat at home binge-watching the new season of Stranger Things on Netflix.

But the reason for these insane bouts of backyard binge drinking might surprise you. In the past, we have always been under the assumption that people only hit the bottle a little harder while attending back-lot-bashes because they were surrounded by their motherfucking peoples and having a good time.

Yet, a new study suggests that our dedication to drunkenness at these summertime festivities has less to do with the camaraderie of bonding over beers with our fellow-man, and more to do with the greasy-ass foods that we stuff down our gullets while we are there.

Researchers at the Penn State College of Medicine say they have found significant evidence showing that the kinds of food we eat at backyard BBQs is what turns us into a bunch of loud-mouthed, drunken buffoons in the end.

This conclusion was made after they watched a bunch of drunk mice start to mau down on high-fat foods while their sober counterparts stuck with their regular, low-fat diet.

The study didn’t say, however, whether the mice were drinking beer or hard liquor or if any of them were wearing an apron that reads, “I Like My Meat Rubbed, Jerked & Pulled.”

The best that researchers could offer is that scarfing down greasy foods has a way of kick starting that part of the brain where debauchery dwells and sets it on course for a day of drunken indiscretions.

“We think a binge intake pattern is leading to a sensitization of that circuitry—or at least part of it—that’s further enhanced by the alcohol intake,” lead research Yuval Silberman, Ph.D., told Men’s Health.

While there may be some truth to this study, we’re still not willing to let go of the idea that we only drink more during these shade tree shindigs because we’re having fun and perhaps more than just a bit fucking enthusiastic about no longer hanging around our apartments like we’ve been all winter long.

Getting fucked up under the sun with good people is just a human response to being cooped up under grey conditions for months on end and finally busting out of that shit to enjoy life again.

Let’s not over think it.

Let’s not try to establish a rhyme and reason for these shenanigans and offer caution to the repercussions destined to arise from this behavior.

Let’s just get out there and fucking doing it up right this year — nipple shots and all – and rest easy knowing that our flamingo fucking forefathers wouldn’t have had it any other way.