Dwayne Johnson Is Giving Away $300,000 During HQ Trivia On Wednesday 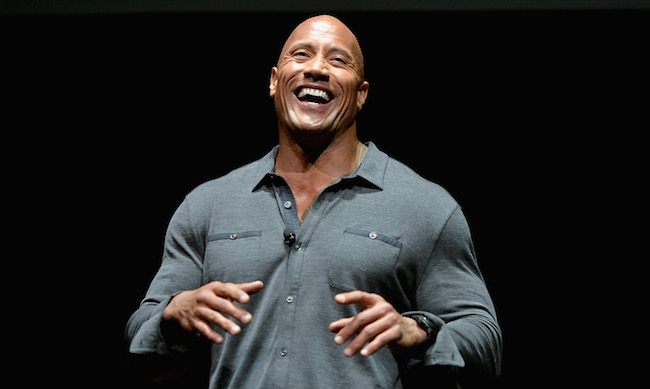 Over the past few years, Dwayne Johnson has earned a reputation as one of the hardest-working people in Hollywood, balancing his early morning workouts in the gym he brings with him to the set of the many movies he’s been a part of with his packed filming schedule.  As far as I know, “Movies Where Dwayne Johnson Fights Things”— whether it’s a skyscraper, an earthquake, or a giant flying wolf—  isn’t an unlockable category on Netflix, but it’s quickly become one of my favorite genres.

The aforementioned flying wolf is just one of the creatures Johnson and his trusty gorilla sidekick have to take on in Rampage, the latest in a long line of virtually identical guilty pleasures starring Johnson that’s scheduled to hit theaters on Friday. The former wrestler teamed up with Conan O’Brien a couple of weeks ago as part of the movie’s promotional tour, but I have a feeling people are going to be most interested in his latest attempt to drum up some publicity.

According to People, Johnson will be appearing on HQ Trivia— the quiz game that’s basically Who Wants To Be A Millionaire? if the grand prize on that show was $12.73— to give away $300,000, which is the biggest jackpot the app that seems like something out of an episode of Black Mirror has had so far. Host Scott Rogowski expressed his excitement with a tongue-in-cheek statement, saying:

“I’ve been a fan of Dwayne Johnson since his CFL days. Getting to work with him is an impossible dream come true.

“HQties across the HQniverse are going to flip their wigs when they see DJ pop up on their favorite game show on Wednesday. We’re giving out our biggest prize ever — enough money to go to the gym for 400 years (which is how long it would take to get as swole as him!).”

At its peak, HQ Trivia managed to get 2.3 million people to play at once, so it’ll be interesting to see how many users will carve out some time in their day for a chance to get their share of the prize.