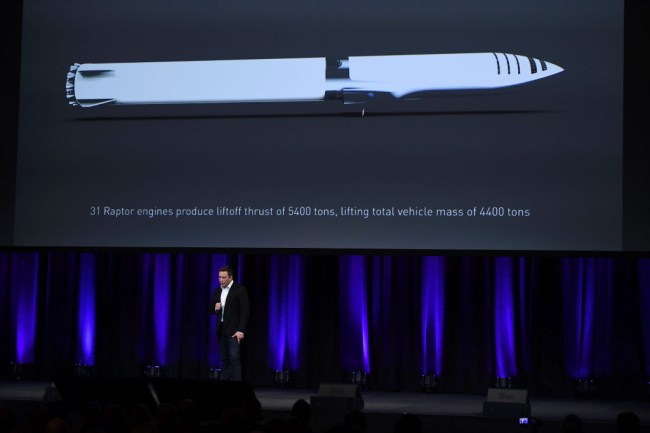 Coexisting with Elon Musk is the closest most of us will ever get to knowing what it’s like to live in the same universe as Tony Stark or Bruce Wayne— unless all of his experiments so far are really a cover for his plans for world domination, which would make him the real-world equivalent of Lex Luthor.

Regardless of his actual end goal, it’s impossible to argue that Musk hasn’t been a— if not the— catalyst when it comes to changing the way we look at transportation. He’s engineered an electric-powered supercar, created AI that will probably end up enslaving us, and plans to revolutionize the way that we commute.

However, Musk isn’t just stopping at the Hyperloop. While speaking at the 68th International Astronautical Congress in Adelaide, Australia on Friday, he primarily discussed his plans to get humans to Mars by 2024. Towards the end of the presentation, he also announced a new plan to ferry people around the planet— one that can complete virtually any journey in less than an hour.

Musk has dreamt up a rocket ship with the world’s best code name— “Big Fucking Rocket” (shortened as “BFR”)— which he says could complete a journey from New York City to Shanghai in about 30 minutes. You might think such a trip would set you back quite a bit, but Musk claims it will somehow be as affordable as it is efficient:

Musk claims the BFR— which can hold about 100 people in its 40 cabins— could complete a journey to anywhere on the planet in under an hour. You also wouldn’t have to worry about turbulence because of how high the rocket will travel into the atmosphere. There’s currently no set date for the inaugural voyage, but the future of transportation could be here within a decade if everything goes to plan.