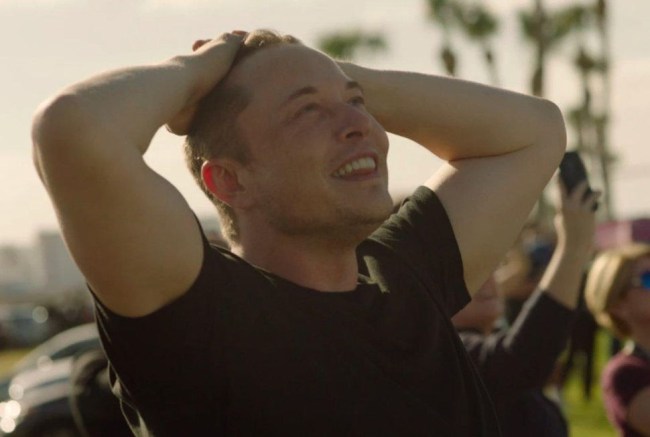 Last week when SpaceX’s first Falcon Heavy rocket launched from Cape Canerval, Florida we were all fanboys of the unbelievable moment for the future of space exploration. But the biggest fanboy was Elon Musk, who saw his personal Tesla Roadster get shot into space as it was part of the payload in the Falcon Heavy rocket. The Tesla Roadster was catapulted into space where its orbit is on a collision course with an asteroid belt between Mars and Jupiter.

National Geographic captured the moment of the liftoff by the megarocket as well as the overjoyed reaction by Musk. While recording for the second season of the TV show Mars, NatGeo captured the exuberance that overwhelmed Musk and even caused him to drop an F-bomb. “Holy flying f*ck,” Musk says as the first SpaceX Falcon Heavy rocket blasts off from Launch Pad 39A at NASA’s Kennedy Space Center. “That thing took off.” After the Falcon Heavy rocket was in the air, Musk ran outside of a command center to view the historic launch with his own eyes. “That is unreal,” Musk uttered.

Later that day at a press conference, Musk told reporters, “Crazy things can come true. I didn’t really think this would work — when I see the rocket lift up, I see a thousand things that could not work, and it’s amazing when they do.” In other space news, a new scientific report estimates that the sun will be cooler and dimmer soon thanks to a cycle that once caused seas to ice, which you can read HERE.