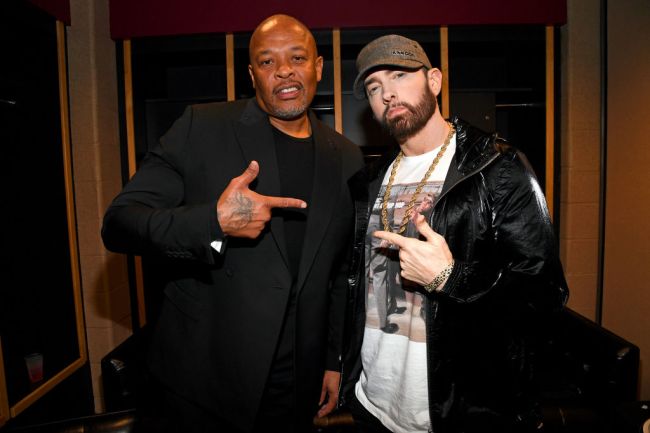 Dr. Dre posted a video of Eminem rapping the rapid-fire closing verse of his 2020 hit Monster with the caption: “Marshall Mathers vs Who???!!”

RELATED: Eminem Breaks Streaming Record – How Much The Rapper Made On Spotify In 2021

The Instagram video was watched over 2.4 million times, and received thousands of comments – including one from Swizz Beatz. The On to the Next One producer suggested that Slim Shady go head-to-head with Busta Rhymes in a Verzuz battle.

In November 2020, Busta Rhymes named three rappers that he would want to challenge in a Verzuz rap battle – which included Eminem.

“I would love to spar against anybody,” Busta told Complex. “As long as their catalog is a powerful catalog because I don’t want to do a corny Verzuz.”

In October 2021, iconic b-boy dancer Crazy Legs revealed that Busta Rhymes told him that five rappers respectfully declined to battle him on Verzuz.

One rapper who openly admitted that he wants nothing to do with a rap battle against Busta Rhymes is Fat Joe.

“Fat Joe is scared to do Verzuz with Busta Rhymes and so is everybody else,” Fat Joe said during an Instagram Live session. “You gotta understand, sometimes you ever notice—you seen boxers and they knock everybody out? People be scared to fight those boxers.”

“Busta Rhymes is gonna out-rap, out-perform anybody who goes up in a Verzuz with him. That’s a fact,” Joey Crack proclaimed. “Yo, Busta Rhymes nobody wanna get in there with you, man. You might have to be an honorary—they gotta give you the check for no reason.”