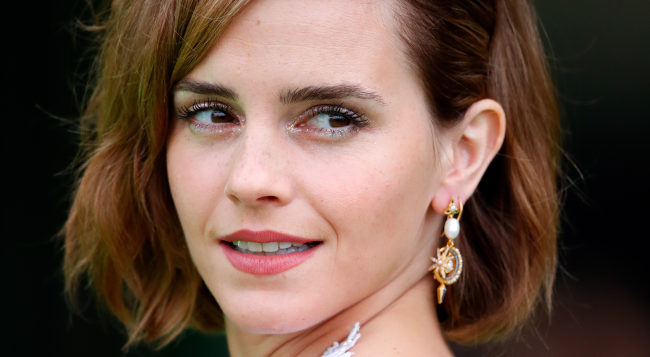 Emma Watson says she got to interview one of her “idols” this week when she met with former United States Vice President Al Gore at the Climate Reality event in Edinburgh on Tuesday.

“I died,” Watson wrote on Instagram. “It was really surreal to meet and interview one of my idols. I think one of the many reasons I find Al Gore so compelling is that – even though he lost one of the biggest fights of his life to become president in 2000 (by such an unbearably close margin…) he has continued to do the work he set out to do despite humiliation, loss and defeat… the tides have been against him for years and he’s kept swimming. That to me is a hero. Thankfully climate change action is becoming mainstream and the tides have turned in his direction and now we are all swimming with him.”

The outfit in that photo is the one the 31-year-old actress wore to meet with Vice President Gore. It was custom created, according to Watson, and very eco-friendly. It was also, according to Page Six, “accessorized with gold Epona Valley bird hairclips ($98).”

“Thank you to the loveliest Emilia for making me this beautiful custom piece,” Watson explained on Instagram. “It was handmade in London using leftover fabrics consisting of 62% recycled yarn that was locally sourced, woven, and printed in Italy.”

While many of Emma Watson’s followers and fans appreciated the climate consciousness of her ‘fit, many others were left questioning why Watson would wear a midriff-baring, bra-exposing outfit to meet with a world leader such as Gore.

“Love that the dress is made of leftover fabric but personally would have chosen something to cover bra for meeting Al Gore,” one person wrote.

“She went to meet Al Gore in a bra?” asked another, while someone else asked, “Where’s the rest of the top?”

“It’s really cute however doesn’t seem professionally appropriate,” another commenter wrote. “This would be great in a shoot but I seriously can’t imagine wearing that during a political/professional setting.”

“You weren’t cold?” another fan asked.