How This Week’s Doctor Strange-Focused ‘What If…?’ Could Hold The Key To ‘No Way Home’ 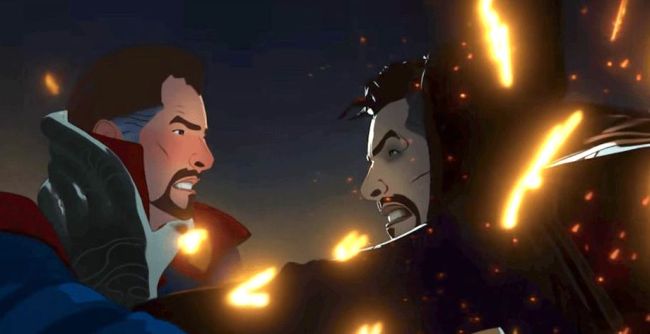 Here’s what we know about the Marvel Cinematic Universe with absolute certainty: each of their projects contains some sort of narrative link, whether it be a post-credit scene or otherwise, that not only connects it to the stories to come in the future but gets fans increasingly excited for them. Think Nick Fury at the end of Iron Man, Mjolnir at the end of Iron Man 2, Thanos in the Avengers post-credit scene — the list goes on and on.

Now, while What If…? has yet to do that in its first three episodes, given its multiversal nature — Captain Carter, who debuted in the pilot, is rumored to appear in Doctor Strange in the Multiverse of Madness — linking the series to the greater MCU canon is but an eventuality. And this week’s Doctor Strange episode could be that link.

During our interview with What If…? head writer A.C. Bradley, we discussed this week’s Doctor Strange episode, which prompted her to share the following description of the story:

“With Doctor Strange, it’s all about loss. It’s like, where would loss lead a man? Especially a man who has these kinds of powers. How far would he go?

An interesting description in and of itself, Bradley’s characterization of Strange’s What If…? tale becomes even more intriguing when considered in the context of the No Way Home trailer.

As we discussed in our No Way Home trailer reaction podcast, something about Doctor Strange — a man who once claimed it’s his job to “protect your reality, douchebag” and was willing to let teenage Peter Parker die to protect the Time Stone — being so eager to break the multiverse open for Peter’s petty needs just feels suspicious. Granted, shattering the multiverse may not be his intention, but someone of Strange’s stature should certainly be well aware of the risks.

Due to Strange’s characteristic inconsistencies, MCU fans have begun theorizing that perhaps the Sorcerer Supreme is not quite as he seems, whether it be due to a Mephisto possession (yup, Mephisto theories are back already) or a post-Thanos-snap mid-life crisis. But what if Doctor Strange’s bizarre behavior could be explained by What If…? itself.

Based on what A.C. Bradley told us, we can infer that this week’s What If…? episode will feature a Sorcerer Supreme driven by the grief of a lost loved one, potentially even Christine Palmer, who was played by Rachel McAdams in the 2016 film and is set to return in The Multiverse of Madness. What if this version of Doctor Strange, so desperate to reunite with Christine, steals the life of an alternate universe Stephen Strange in order to be with her? And what if that evil, alternate Stephen Strange — the one we’re actually seeing in the No Way Home trailer — is so willing and ready to tamper with the multiverse… because he already has.

Not only does this potential revelation affect the events of No Way Home but it also potentially hints at what’s to come in Multiverse of Madness: Doctor Strange won’t be going into the multiverse to rescue someone, but rather, will be the one trying to escape from it.

The Phase 4 mystery surrounding the Sorcerer Supreme only becomes all the more fascinating when you consider what Shang-Chi and the Legend of the Ten Rings director Destin Daniel Cretton told us when we asked if he has any explanation as to why Wong is in his film but not Doctor Strange.

Given the inclusion of Wong, and the film’s very mystical and magical elements, I warned Destin that I have a feeling fans will pose the same question lodged at Loki and particularly WandaVision: where the hell is Doctor Strange and why is he not doing his job? Cretton’s response, while unspecific, was revealing nonetheless:

“I will respond by saying you’re not alone in asking that question and there is a *very clear* answer to that question. All of those types of ‘Where people are in the universe at this particular moment’ — there are clear reasons why Doctor Strange is not there,” Cretton told the Post-Credit Podcast.

“I wish we could’ve put Doctor Strange in our movie. But there are very clear reasons why the characters who showed up could show up very briefly, there’s also a very clear reason why they’re not physically in the room. But, all of that is a big conversation with Kevin [Feige] and the producers and directors who are working on other things.”

While Cretton didn’t specify where Strange is, his answer inherently indicates that he is *somewhere* that ultimately precludes him from being involved in the likes of WandaVision and Shang-Chi, and I’m beginning to believe that “where” maybe in a multiversal prison under the control of an evil, alternate dimension Doctor Strange Supreme who’s all too willing to create multiversal hell with Spider-Man because he is, in fact, not our Doctor Strange.

The Doctor Strange episode of What If…? will hit Disney+ on Wednesday, September 1, while Spider-Man: No Way Home is scheduled for December 17, and Doctor Strange in the Multiverse of Madness is set for March 25, 2022.