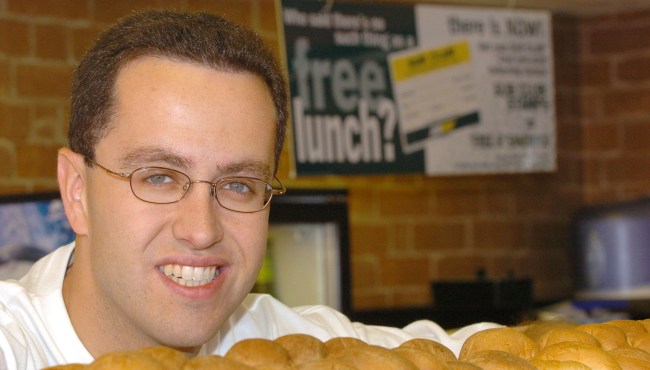 If you were hoping disgraced Subway spokesperson Jared Fogle was suffering in prison (and who among us hasn’t been?) I have some disturbing news for you. He is no longer getting his ass beat. In fact, it seems to be quite the opposite.

Fogle, who is currently serving a 15-year sentence on child pornography charges at the Federal Correctional Institution in Englewood, Colorado, is apparently living his best life. At least according to a man who served eight months there with the POS pedophile.

In a recent interview, ex-inmate Marc Brooks says Fogle looks “healthy and fit” and estimated the former pitchman now weighs between 180 and 200 pounds. Which is probably a result of the fact that Fogle has been eating well, having received a certificate in culinary arts last year.

“He’s living the life in there,” Brooks told the Daily Mail. “He’s eating good, working out, cooking…not a care in the world.”

Well, bully for him. Guess we won’t be hearing about any more ludicrous appeals and frivolous lawsuits from him or his wack ex-wife then, right?

There are also pool tables, ping pong tables, and dart boards and Fogle is just is free to roam around.

“Subway Guy is in the low security section, he’s in a dry cell, that means the door is never locked, he can wander around and use the phone, use the computers, use the movie theater, whatever he wants,” added Brooks.

“He gets a lot of down time, there’s a recreation station with cards, Monopoly, Risk, so he can sit outside in the sun and chill with his little sex offender buddies.”

Brooks said when he first got there he’d make fun of Fogle, but soon he said he “didn’t want to go anywhere near him or his nasty sex offender buddies.”

“I was totally grossed out by all the pedophiles in there, sometimes you’d want to punch them, because of the disgusting stuff they would say, but I never did that, I didn’t want to mess up and get extra time, I wanted to get home to my momma and my sister,” said Brooks.